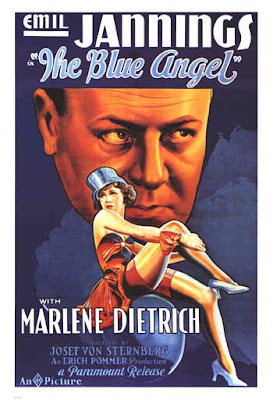 Foreseeing the intellectual laziness of the American population decades before martial art films dubbed theirs, Josef von Sternberg simultaneously shot this film in both English and German (the German is slightly different). Since my understanding of the German language consists of "Juden Verboten" and "Kann ich noch ein Bier", I watched the German version with subtitles. No doubt I have offended the average American filmgoer who would rather watch Tobey "Spiderman" Maguire in the English remake of Brothers than watch the excellent Danish original starring Connie Nielsen. The best way I can think to explain this to these sub-title haters is this: Remember New Coke.

Emil Jannings plays Professor Immanuel Rath, a reserved German schoolteacher who becomes concerned over his students’ fascination with the goings on at the local cabaret, the Blue Angel. When Rath goes to the cabaret to investigate he finds Lola (Marlene Dietrich), an alluring songstress who doesn’t mind changing her clothes in front of men she just met—nor does she mind dropping her panties on them. Somehow Rath ends up taking Lola’s panties home with him, thus the reason he must return the next day to see Lola—no doubt a complex case for Freud.

With his students hiding in a cellar, Rath is treated to a strange seduction at the hands of Lola. Who combs someone’s hair? When Lola is ordered to drink with a drunken sailor who treats her rudely, Rath becomes enraged and chases the sailor out of the cabaret. When the sailor returns with the police, the cabaret’s magician hides Rath in the cellar containing his students. He chases them out of the club and then is given drinks to calm his nerves. While he’s getting loaded, Lola begins to sing the song synonymous with Dietrich: "Falling in Love Again".

The next morning Rath wakes up in Lola’s bed and is treated to breakfast for two. This makes him late for class. When he arrives at class he finds a student-drawn picture of him as Cupid. After he tries to punish the class they become unmanageable, which causes the headmaster to intervene. This leads to the headmaster asking for Rath’s resignation. After packing up his belongings, Rath goes to the Blue Angel to find Lola’s travelling troupe preparing to leave. He asks Lola to marry him. She laughs at him 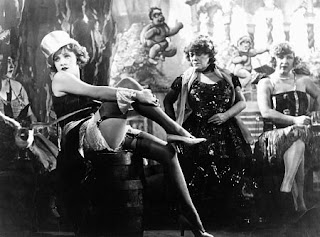 , but somehow they end up married nonetheless. The next time we see Rath, he’s selling girlie postcards at Lola’s shows. He is no longer superior to anyone in the group. As a matter of fact, he’s viewed as the lowest member in the troupe and Lola treats him like a big loser.

Four years pass and Rath has literally become the troupe’s clown. When they return to Rath’s hometown the show is sold out due to him—who wouldn’t want to see a former professor as a clown? Meanwhile, a strongman has become enamored with Lola. When Rath doesn’t want to go on stage Lola has to force him to. While being treated to eggs being broken on his head, Rath watches Lola flirt with the strongman backstage. He begins to crow like a rooster and chases Lola and tries to kill her. The strongman and others prevent this and tie Rath up in straightjacket. Once he calms down Rath is let out. In one of the bitterest endings I can think of, Rath leaves the Blue Angel hearing Lola sing "Falling in Love Again" to another man and returns to his old school. The final shot of the film sees the former professor, in spotlight, grasping his desk as bells are ringing. Depressing enough?

This film is a good example of German expressionism. It is very dark, full of symbolism, and unsentimental. The character of Professor Rath is the epitome of the German male who before the war was a hard-working respectable type, who finds himself completely destroyed in the post WWI era—there’s a reason Hitler came to power. The overall setting of the film looks grimy and depressing, as though everything needs a good cleaning. Perhaps this is why Sternberg opened the film with a woman cleaning a window.

Both Jannings and Dietrich are compelling as this oddball couple. Jannings, who was known for his histrionic performances, does a good job at being both pompous and pathetic. This was just another one of his great performances, like The Last Laugh and The Last Command. For Dietrich, however, this was the role that launched her American film career. She showed that she could be convincing as a femme fatale. Thus, she and Sternberg would go on to make a number of films capitalizing on how well she played the vamp, most notably Morocco, Dishonored, and Shanghai Express. Of course this film isn’t their greatest collaboration, but it is good nonetheless.