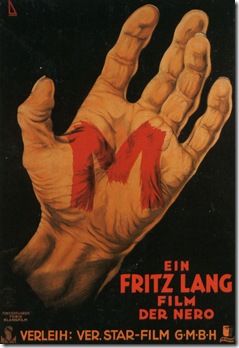 The original title of this classic 1931 German film was Murderers Among Us. Though Hitler had not come to power yet, his little friends, the Nazis, had achieved great success in recent Reichstag elections. So, when they saw this title they naturally assumed it was about them--you would think this admission would have had a bigger effect on the German population. Anyway, they tried to derail director Fritz Lang’s production, via, not surprisingly, death threats. Though they weren’t right about many things, the Nazis and their reliance on mob mentality were essentially a key underlying theme. In the end, the name was simply changed to M. Two years later, with the Austrian madman fully in charge, Lang thought it best if he leave Germany. Unlike the Nazis, he was right.

Based on the real-life case of the Monster of Dusseldorf, Peter Kurten, this German Expressionistic film about the hunt for a child killer is Fritz Lang’s greatest talking picture. Not only was it provocative storytelling at its best, it was also one of the biggest influences on the development of film noir. Darkness, both internal and external, is at the core of this picture. 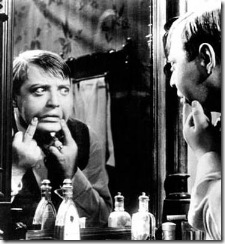 Peter Lorre plays Hans Beckert, a pathologically-driven serial killer of children. In the beginning of the film we learn that 8 children have been murdered over the past year. We see a blind man (Georg John) selling balloons and a little girl, Elsie Beckmann, taking the hand of a whistling man who buys her a balloon. A ball, the simple toy of a child, rolls down a hill and comes to a rest—and so has little Elsie. The murder takes place off-screen, but Lang uses Elsie’s balloon to show us all we need to see: now separated from her empty hand it ends up ensnared in telephone wires.

With angry parents demanding justice, the police begin to feel threatened and turn their investigation toward the seedier side of town: the criminal underworld. Seeing their activities strongly scrutinized by the police, the criminals, led by Shranker (Gustaf Grundgens), must now join in the search for the killer to ensure their own survival. Lang uses intercut scenes to show how both police and criminals plot strategies to get the killer—in essence saying there is no difference between the two groups. They decide to place those least likely to be noticed to set up surveillance: beggars. Again, Lang is making a social comment, especially when you consider what was going on in Germany at this time.

When the balloon seller hears a man whistling Edvard Grieg’s “Hall of the Mountain King” he remembers that a man was whistling the same tune the day of Elsie Beckmann’s murder. He tips off a nearby beggar, who follows Beckert leading a girl into a candy store. After Beckert throws an orange peel on the sidewalk the beggar pretends to slip on it. Catching Beckert as he slips, 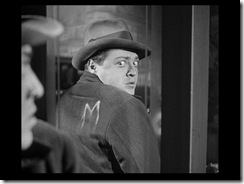 he places a “M” on Beckert's shoulder, via his chalked palm. Beckert is now, literally, a marked man. In addition to this, the police have now tracked a postcard sent to the newspaper by the killer to Beckert’s apartment. When they search his room they find clues that link him to the crimes: Ariston cigarettes and a red pencil.

When the little girl he’s about to kill notices the “M” on his back and offers to wipe it off Beckert realizes he’s caught and runs into an office building. Schränker sends his men to search the building. Not knowing what is happening, a night watchman sounds the alarm. Just before the police arrive, the criminals find Beckert and leave the building—all except Franz (Friendrich Gnass), who now becomes the suspect. To save his own skin, Franz tells the police his friends have taken Beckert to an abandoned distillery to stand trial.

At his trial, Beckert attempts to explain that he can’t be held accountable for his actions because he does them unwillingly. It is an evil inside him that compels him to kill. He utters the classic line, “Who knows what it feels like to be me?" I find it especially interesting that his judges, the criminals, are wearing long leather 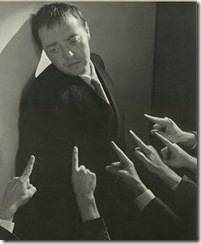 coats instead of robes—another nod to the Nazi’s? Yet, before the criminals can inflict their brand of justice, the police arrive and take Beckert away. At his “real” trial, crying mothers await the verdict of the killer of their children and one says, “One has to keep closer watch over the children. All of you." No wiser words were ever uttered in Germany in the 1930s!

There are very few German films of the 1930s (with good reason) that capture the sense of doom that looms during this period. Lang uses lighting, specifically chiaroscuro, and high-angle shots to emphasize the evil that looms above. It is a menace that can’t be seen, but that doesn’t mean that it doesn’t exist. It is foreshadowing (literally) at its best.

It is apt that Lang would use Edvard Grieg’s “Hall of the Mountain King” from Peer Gynt to identify Beckert to his victims and the viewers. As this opera is all about identity crisis. I suppose Lang took great pride in the fact that he himself was the actual whistler of this tune, since Lorre couldn’t do it himself.

Finally, the choice of Peter Lorre, with his bulging, sad eyes and strange ability to make sympathetic (and creepy) grimaces, was a wonderful choice for Beckert. This role elevated his career, but also typecast him as the villain for years to come. He, like Lang, had to flee Germany and the Nazis.

A must-see on many levels: cinematic, societal, and historical.