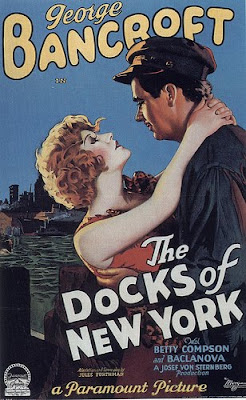 Suicide or marriage… the choice between a quick or slow death—you can quote me.

Josef Von Sternberg directs this 1928 silent classic starring George Bancroft and Betty Compson. Bancroft plays Bill Roberts, a ship stoker on leave and looking for a good time. He meets his good time just in time, as he rescues Sadie (Compson) from trying to drown herself. What’s Sadie’s problem? She’s a waterfront tramp who is disgusted by her life. The two end up at a seedy bar and proceed to get loaded. Self-esteem issues, a horny sailor, and alcohol don’t mix—believe me, I’ve been to Vegas. In a drunken stupor, Bill and Sadie decide to get married—damn you, Vegas and Jose Cuervo! His gift to the bride: a stolen dress, which I suppose is better than a "What Happens in Vegas Stays in Vegas" t-shirt. 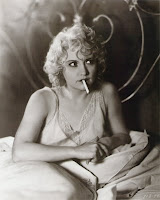 Anyway, the next morning Bill scurries out the door, not saying a word to his "wife"—not even something touching like: merci pour la baise—and returns to his ship. After Bill leaves, the ship‘s engineer puts the moves on Sadie. This is too much for his wife and she kills him. The cops blame Sadie but the murdering wife confesses to her crime. Ah, but the stolen clothes land Sadie in court nonetheless. Once aboard ship, Bill realizes he loves Sadie and he decides to return to shore. He goes to court and confesses to stealing the clothes. He gets 60 days and promises Sadie he’ll see her then. If Sadie knows what’s good for her she’ll use those 60 days to get very, very, very far away.

This film is considered Sternberg’s masterpiece. The story itself is not all that believable, but it is entertaining—especially the rollicking good time at the bar. Bancroft and Compson are superb in their roles. In addition, there is an interesting dichotomy between the night and day shots. The night scenes are sensually and romantically shot. Whereas the day scenes seem cold and menacing. Simply put, the film is visually stunning. A good film to watch.