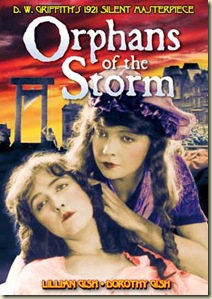 The Plague, the French Revolution, the Reign of Terror, the guillotine, blindness, poverty--what storm didn't these orphans encounter?

D.W. Griffith's last historical epic, Orphans of the Storm, stars the Gish sisters, Lillian and Dorothy, as two orphans facing uncertain times during the upheaval of the French Revolution. Recently orphaned and one blinded, the sisters leave the French countryside looking for a cure for the blind sister in not so gay Paris. The sisters become separated and each faces their own personal hell--one put out as a beggar, the other placed before the guillotine. Eventually the sisters are reunited, the blindness is cured, and all is well. Trust me, the story is too long (2.5 hours) to put every detail in this 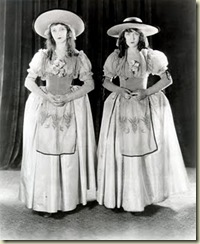 As someone who specialized in this area of history, I have an odd appreciation for this film.  However, I do have a slight problem with the part where Danton rushes in and saves one of the sisters from the guillotine--once you went out in the death wagon you didn't come back with your head still attached, let alone still breathing.

It is said that this is the best acting performance of Lillian Gish's silent career. That is debatable--I prefer her in Way Down East. The film is a bit melodramatic, but still, it really is a silent classic.