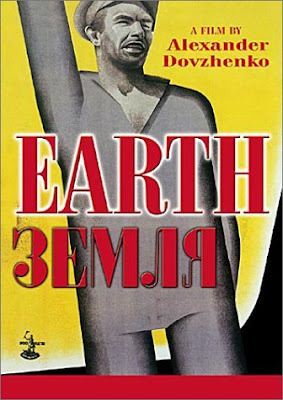 If only the hero of this film, Vasilly, were alive today I could have bought him every man’s Christmas dream gift at the Cracker Barrel—a John Deere hat and t-shirt.

This 1930 silent film, directed by Alexander Dovzhenko, is about a Ukrainian village’s quest for a tractor. Need I say more? Made during one of Stalin’s 5-Year Plans, this is a celebration of modern farming methods and an indictment on private ownership. The landowners (kulaks) in this village become upset when the peasants, using their collective tractor manned by Vasilly, bring in a strong harvest. The kulaks take their revenge by shooting Vasilly as he is walking home one night. Rejecting religion, as all true Soviets do, Vasilly’s family says no to a Ch 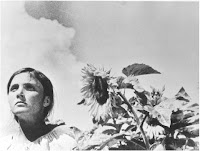 ristian burial and instead carries his body through the fields. When the murderer celebrates his accomplishment by dancing across graves, rain begins to fall on the crops (Dovzhenko’s heavy-handed way of showing tears). Later, the clouds fade and the sun remerges to shine on the earth again.

Besides tractors, what else is this film about? The cycle of life, I suppose. People die and babies are born. Crops grow and then are harvested so that the people can live and the next cycle of crops can be planted. Are you yawning, too?

This film is considered one of the greatest Soviet-era silent films ever made. I can’t agree, seeing as I found both The Battleship Potemkin and October 100 times more watchable than this. The Nazis destroyed the negative of this film during WWII, but an original release print was saved—yet another crime against humanity we can blame on them.