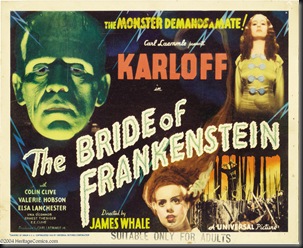 Bride of Frankenstein (1935) is such a staple for classic film lovers and horror movie lovers that it is difficult to add anything to the many reviews and articles written over the years. From the time that director James Whale designed the look for the monster in 1931’s original Frankenstein and directed it to perfection, all the way up to the present day, Mary Shelley’s novel has been a favorite for each generation of movie-makers. Everyone wants to put their own personal stamp on this exciting story, some quite good, others just plain awful. 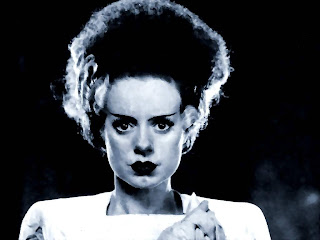 Bride of Frankenstein is different. There has only been 1 attempt of which I am aware at re-making it, a really dreadful movie called The Bride, with Sting and Jennifer Beals. (Remember Mystery Science Theatre 3000? They would have had a hey-day with that one!) As far as other serious attempts, I know of only two that are worth mentioning. These were movies about the entire Frankenstein story, a made-for-TV movie with Jane Seymour as the bride, and Kenneth Branagh’s version featuring Helena Bonham Carter. However, those two can’t really be considered re-makes, as they were trying to film the entire novel.

I think it would be impossible to re-capture the wonderful dark humor infused into the original bride story that was mostly responsible, in my opinion, for its unique nature. Bride of Frankenstein was written by William Hurlbut and John Balderston, and also incorporated James Whale's brand of side-glancing, off-beat humor which was his personal stamp. When I was a kid, I thought the story was deadly serious, and believed I should see it that way. After I had a few years under my belt, I realized how really funny this movie is. It still has the pathos of the poor monster’s loneliness and solitude, it has the wonderful eerie atmosphere of light and shadow, that fabulous laboratory, and lots of lightning. But it also has Ernest Thesiger as Dr. Praetorius with his little human menagerie, O.P. Heggie as the violin-playing blind hermit, and of course Elsa Lanchester with the hair! 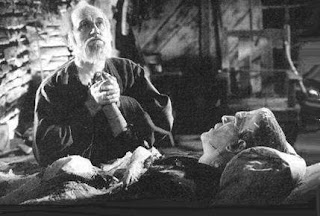 As for the storyline, the movie opens with Mary Shelley, Lord Byron and Percy Shelley at the famous villa where Mary wrote the novel "Frankenstein."  She explains that the story was not finished, and begins to tell the rest.  The monster is back on the rampage, having escaped the fiery windmill in the first story.  (In the opening scene, Boris Karloff fell into a well which was part of the set and broke his leg.  The metal rods that held his legs rigid for his distinctive walk helped keep the bone in place until he got to a doctor.)  The monster frightens people everywhere, is misunderstood in his intentions, and longs for someone like himself to be his friend. He comes upon a hut in the woods and hears the music of a violin. The hut is inhabited by a blind man, who welcomes the monster without fear since he can’t see him. The monster learns some words, and the two men sit down together to eat dinner. When the blind man strikes a match to light a cigar, the monster screams because of his fear of fire. The blind man explains to him that fire is good, and offers him a cigar. “Smoke is good!” the blind man says, and the monster inhales and says “Smoke….good.” (In these days of political correctness, we may yet see this scene cut out, although the rampaging and killing will of course be left in.) Some villagers come by, and since they are not blind, they panic, attack the monster and drive him away. 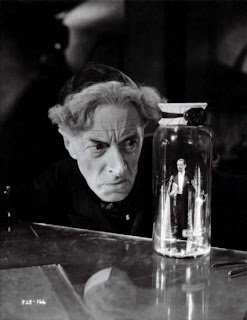 Meanwhile, Dr. Praetorius is insinuating himself into Dr. Frankenstein’s life (Colin Clive reprises his role, looking a bit the worse for wear during the 4 years since the original Frankenstein. Clive had also broken his leg just as shooting began on the film, and is shown in seated positions throughout.) Ernest Thesiger is wonderful as the mad Dr. Praetorius, with his long, skeletal face and clipped British accent. He plays Praetorius in a threatening but gleeful way, prancing at times and clapping his hands together. Frankenstein is not interested in trying to re-animate dead tissue anymore, but Praetorius piques his interest by showing him his new brand of re-animation, or rather, creation of life. Praetorius displays his collection of tiny people kept in glass jars, a king, a queen, a bishop, a ballerina, a mermaid, alive and well and playing pranks. (The famous little person, Billy Barty, was to have been part of the menageries, but his scenes were cut.) When the tiny people speak, it is with tiny squeaks like cartoon mice. Frankenstein is horrified and interested, but still does not want to go back into the body-building business. Later, the monster finds Praetorius sitting in what looks like an open-air crypt, drinking gin and relaxing. When the monster realizes that it would be possible for Dr. Frankenstein to create a female, Praetorius is able to enlist him to kidnap Frankenstein's wife and hold her hostage until he agrees to do so. 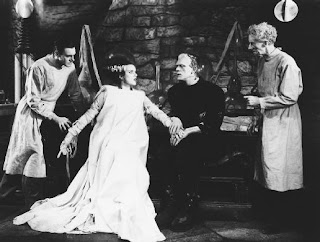 The female is created in the same laboratory (that’s pronounced laBORatory) where the monster was brought to life. Her shroud is much more stylish, though, well-fitted and displaying a fine figure.  (It was so well-fitted that Elsa Lanchester was unable to move.  She had to be carried around the set.)  The bride  opens her eyes – the next scene shows her standing, dressed in a widely-shaped, floor-length, long-sleeved white dress. (Lanchester was 5'4", and was put on stilts to make her much taller.)  Her hair is done up in a very chic updo, dark with lightning-shaped white hair on either side. She sees Dr. Frankenstein and likes him, sees the monster and hates him, and utters a few distinctive echoing cries. The monster sees that she refuses his overtures, and decides he has had enough rejection in his life. He grabs a lever. Dr. Praetorius cries “Don’t touch that lever. You’ll blow us all to atoms!” Why such a lever would be installed in the first place is never explained. The monster, in an unusual mood of love for his creator, tells him to leave – “You live! We belong dead!” Then of course, he pulls the lever, and Dr. Praetorius’ warning comes true.

I just cannot write about Bride of Frankenstein without paying tribute to two movies where it plays major roles. The first is Gods and Monsters, a biographical film about James Whale with Ian McKellan,  In a flashback for Whale, we see him shooting the scene where the bride stands in her finery. The actor who plays Praetorius turns to Whale and says “Are Colin and I supposed to have done her hair?” Gods and Monsters is a tremendous movie and you shouldn’t miss it. 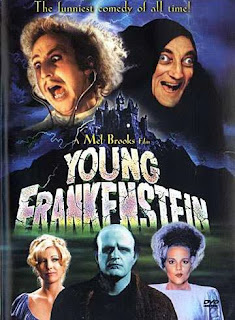 The second movie is, of course, Mel Brooks' Young Frankenstein. For any lover of the Frankenstein movies, this is a must. It takes elements from Frankenstein, Bride of Frankenstein and Son of Frankenstein. It is one of the greatest comedy films I have ever seen. The wonderful Madeline Kahn plays the woman who becomes the bride, and the scene where she comes out of the bathroom to her new husband, with her hair in that style, is not to be missed. Cloris Leachman as Frau Blucher, Peter Boyle as the monster, Marty Feldman as Igor (that's pronouced Eye-gor), Gene Hackman as the blind hermit (a scene with an ending line I'll never forget),Terri Garr as the voluptuous laboratory assistant and the marvelous Gene Wilder as Dr. Frankenstein (that's Fronk-en-steen) are an unbelievably funny ensemble.  Frankly, I can never watch any of the Frankenstein movies anymore without the hilarious Young Frankenstein always in my mind. Make a really fun weekend for yourself.  Watch these movies in order.  It will be an experience you won't forget.
Posted by Kimberly J.M. Wilson at 3:53 PM