Scott Hastings is a first-rate ballroom dancer with a problem: He’s a rebel with a cause—and his cause is to expand the boundaries of traditional dancing. Unfortunately, Scott’s goal doesn’t sit well with the Australian Dance Federation nor his dancing partner Liz. 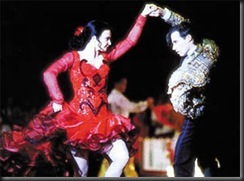 When he gets “boxed in” during a competition, Scott lets loose with some energetic, flashy moves…and promptly gets disqualified. Even worse, Liz walks out on him just weeks before the most important dancing competition of the year—the Pan Pacifics—stating adamantly: “I won’t dance with you until you dance like you’re supposed to.”

Scott’s mother, who operates a small dance studio, is temporarily crushed. She immediately sets out to find a new partner for his son. Unknown to her, the ideal partner is one of her students, a shy inexperienced dancer named Fran. After class one night, Fran approaches Scott about dancing with him. Initially, he brushes her off, but Fran impresses him when she confides: “I want to dance with you—your way—at the Pan Pacifics.”

There is much to enjoy in Baz Luhrmann’s Strictly Ballroom (1992), which works as a quirky comedy, an unlikely romance, and a Cinderella story. At the heart of the film is the marvelous chemistry between leads 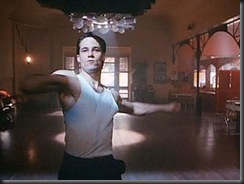 Paul Mercurio (as Scott) and Tara Morice (as Fran). Ballroom should have done for the charismatic Mercurio what Dirty Dancing did for Patrick Swayze…but, alas, it didn’t. Still, he impresses in Strictly Ballroom, both on the dance floor and in the tender scenes with Morice. She shines , too, and offers a nice vocal on a cover of Cyndi Lauper’s “Time After Time.”

Indeed, Lauper’s song provides the background for one of my favorite scenes: a practice montage between Scott and Fran that has them dancing on the studio’s rooftop next to a glittering Coca-Cola sign. But then, fine scenes abound in Strictly Ballroom, as evidenced by a Pasodoble duel between Scott and another character—and a closing scene set to Paul Young’s “Love Is in the Air” that always leaves me with a smile.

There are few surprises in Strictly Ballroom, but that’s all right. It’s one of those movies where you can see where it’s headed and you look forward to getting there. And when it ends just the way you imagined, then you have that satisfying feeling inside. That, my film friends, is what a “feel good” movie is all about.