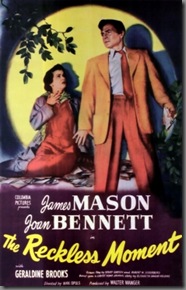 Who knew a 1949 film starring James Mason and Joan Bennett would be so obscure? It took me years to finally see this, and this would not have happened if TCM hadn’t finally premiered it this past January.  TCM has been on the air for almost thirty years, you would think The Reckless Moment might have found its way to the airwaves before now.  Yet, sometimes there are reasons a film doesn’t show up on TCM very often: it’s not popular, contract rights, lost prints, etc. Or, in the case of this film, it’s just not that good and not many people are clamoring to see it.  I suppose if the 1001 Movies You Must See Before You Die book hadn’t listed it in its first edition many people wouldn’t have requested that TCM show it.  Ah, so much anticipation but so much disappointment—it reminds me of my first (and only) encounter with caviar.  For years I’d seen rich people on TV and in movies praise the glory of this delicacy, so imagine my disappointment when I tasted what amounted to salty Pop Rocks (without the sugar) in my mouth at a college luncheon.  How can you tactfully spit out such swill when you are surrounded by inquisitive academics who have a really bad habit of invading your personal space?  Perhaps my experience with The Reckless Moment wasn’t as bad as the one with caviar, but it was such a letdown. 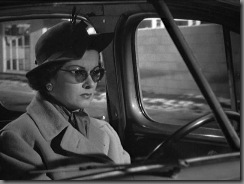 The great Max Ophuls only directed four Hollywood films: The Exile (1947), Letter from an Unknown Woman (1948), Caught (1949), and this less than stellar endeavor. Of the four, only Letter from an Unknown Woman showcases his true brilliance. Many critics would disagree with my assessment of The Reckless Moment, as one has went so far as to call it a masterpiece on par with Ophuls’ French marvels The Earrings of Madame de…(1953), Lola Montes (1955), and La Ronde (1950). I can’t bring myself to say this for many reasons—the most important being I can’t decide what type of film it is.  Is it a film noir or a melodrama?  Personally, it feels like a combination of both, and I don’t like to mix oil and water together.

Joan Bennett plays Lucia Harper, mother of two and fixer of all.  When her incessantly annoying teenage daughter Bea (Geraldine Brooks) gets involved with an unsavory older man named Darby (Shepperd Strudwick), she pays the man a visit and threatens him.  After an unfortunate accident involving her daughter, in 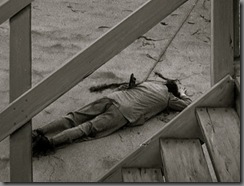 which Darby falls from the Harper’s pier and unto an anchor, Lucia must drag the body out to sea and dispose of it.  Not long after this unusual chore, a very calm Irish thug named Martin Donnelly (James Mason) shows up and demands $5,000 for some letters Bea wrote to Darby.

Donnelly’s interactions with the entire Harper family can only be described as bizarre.  I think this is what I most dislike about the film.  There are few would-be movie gangsters that I recall being polite and friendly to those from whom they are extorting money.  He gives horseracing tips to the father-in-law (Henry O’Neill) and helps Lucia’s son (David Bair)fix something on his car.  Oh, and then there is his quick infatuation with Lucia herself. Mind you, an infatuation he knows can’t go anywhere since she thinks he’s scum.  Perhaps it was the short running time (a brisk 82 minutes) or the Hollywood constraints Ophuls found himself working under, but I couldn’t believe the sacrifices that Donnelly makes for Lucia.  While unfulfilled love is a consistent Ophuls’ theme, it does not work here.

The acting is not the issue, as both Mason and Bennett give good performances. He is quietly menacing and she is confidently controlled.  Mason comes off as his usually does—as though he isn’t trying.  To me, Bennett’s character is the more interesting of the two. 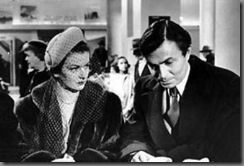 No matter what comes her way, Lucia always seems to steady herself and continue on with a cigarette in one hand and a plan in the other.  Thrown into a world so unlike her own she never seems to change—it’s perfectly natural that a blackmailer is in her living room and that her father-in-law wants to invite him to dinner. Perhaps if Ophuls had had more time to develop the story, or if the writers had written a better adaptation of Elizabeth Sanxay Holding’s “The Blank Wall”, Bennett’s strange performance could have saved this picture.  Who knows?

One thing, on a sort of side note, that we do know is that Bennett would personally find herself in a somewhat similar situation in 1951 when her husband, Walter Wanger (who produced this film), shot Bennett’s agent, Jennings Lang, because he was having an affair with Bennett.  Wanger’s sensational attempted-murder trial rocked Hollywood. Wanger pleaded temporary insanity (the crime of passion defense) and served four months.  Oddly enough, Bennett and Wanger remained married until 1965.  It is said that the clandestine meetings between Bennett and Lang were an inspiration for Billy Wilder’s The Apartment (1960).  The event effectively ended Bennett’s film career, she would only make a handful of movies following the incident.