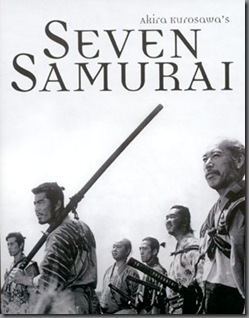 Massive is the word that comes to mind when I think of acclaimed Japanese director Akira Kurosawa’s Seven Samurai (1954).  Everything was massive: the set construction, the cast, the battle sequences, and the film’s running time of 207 minutes.  It was Kurosawa’s first samurai picture, and it set the bar for all others that would follow. Not only did it influence an entire generation of Japanese filmma 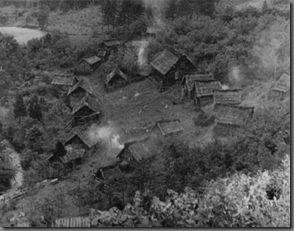 kers, but it was also a blueprint for future Hollywood films like The Dirty Dozen (1967) and The Magnificent Seven (1960).

Set in 1587 Japan during one of its many civil war periods, the story is a simple one: a farming village of peasants are tired of having their crops and women carried off by bandits every harvesting season, so they decide to hire a samurai for protection.  They end up hiring seven samurai to not only defend the village, but to teach them how to do it for themselves.  Kurosawa refused to shoot the scenes in the village inside a soundstage and made his studio, Toho, construct an entire village on the Izu Peninsula. The scale of this endeavor was vast, and it only added to the hallmark of Kurosawa’s gritty realistic style.  The overlooking shots of the village from the surrounding mountains and forest is a testament to how much work went into building it. 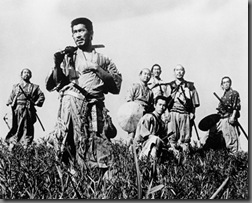 As a result, So Matsuyama was deservedly nominated for an Academy Award for Best Art Direction.

The cast is comprised of a core group of characters and hundreds of extras—as well as a stable of horses.  The seven samurai are played by Kurosawa regulars. Takashi Shimura (Ikiru, 1952) is Kambei, the reflective leader of the group. Toshiro Mifune (Rashomon, 1950) is Kikuchiyo, the comical but short-tempered wannabe samurai.  Daisuke Kato (Rashomon) is Shichiroji, a stoic man and good friend of Kambei. Isao Kimura (High and Low, 1963), is Katsushiro, a young warrior who wants to learn from others.  Yoshio Inaba is Gorobei, Kambei’s second-in-command. Minoru Chiaki (Throne of Blood, 1957) is Hayashida, a cheerful man who keeps up the group morale.  And, Seij 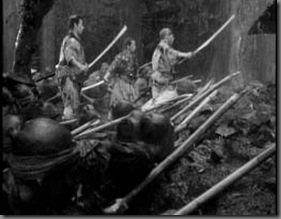 i Miyaguchi (Ikiru) is Kyuzo, the complete badass swordsman of the group.  All seven men represent the different elements of the human personality. While Mifune’s Kikuchiyo is perhaps the most memorable of the seven, due to his character’s over-the-top personality, I think all of the men bring an incalculable amount of humanity to the roles they are playing.  They all embody the samurai code of bushido: frugality, loyalty, honor, and martial arts master.

It is interesting to watch how the samurai prepare the peasants for the impending siege.  They instruct them on how to build fortifications and how to properly use a weapon.  Along the way they teach them discipline and responsibility.  All of these things are abundantly important for the massive t 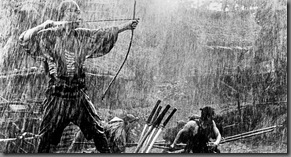 hree-day battle that they engage in with the bandits.  Trenches are dug and abatis and cheval de frise are constructed as means of defense, but eventually hand-to-hand combat is required.  Kurosawa’s decision to have the decisive battle scene take place in a torrential downpour was inspired.  Chaotic and frenetic, there is a cleansing element to it as well—by standing up for themselves the peasants have had years of misery washed away from them.  They are reborn.

My biggest complaint with Seven Samurai is that it is way too long. I know many people say the pace is quick, but they must have seen the edited v 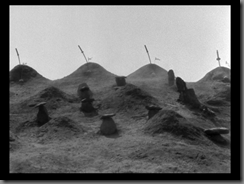 ersion, because if they saw the film at its original length I can’t see how they would say that.  Had Kurosawa cut about thirty minutes the film would have run more smoothly for me.  Yet, other than it being a complete endurance test, Seven Samurai is a treat to watch.  As mentioned above, the battle scenes are intricately choreographed and shot from varying angles, which gives the viewer a bird’s eye view of the intricacies of battle design and implementation.