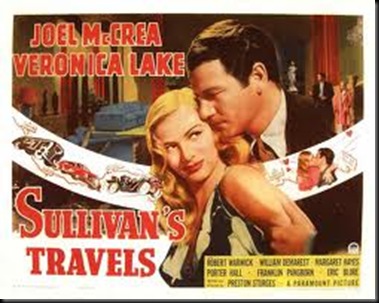 Preston Sturges is one of my favorite Classic Hollywood directors; I am especially fond of his The Lady Eve (1941) and The Palm Beach Story (1942). His brand of sophisticated comedy is risqué and witty, just like my other favorite director from the period: Ernst Lubitsch.  What I appreciate most about Sturges’ is his ability to successfully blend sophistication into a screwball comedy—that’s why I adore The Lady Eve. And, that is also why I was somewhat let down by Sullivan’s Travels (1941). Now, I’m not saying it’s not a good film—I just found it uneven. If I were a psychiatrist I would diagnose it as manic depressive. At times it is a 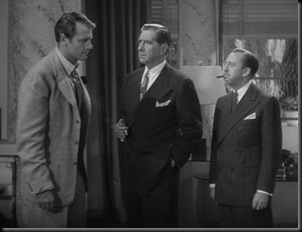 John L. Sullivan, aka Sully, (Joel McCrea) is a successful Hollywood director who specializes in lightweight comedies but longs to make movies about the human condition.  No more Ants in Your Pants for Sully—he wants the studio to back his O Brother Where Art Thou?  To prove he’s capable of telling an honest and powerful story about the sufferings of everyday people in the Depression Era, Sully decides to disguise himself as a hobo and live amongst them. However, the head of the studio (Robert Warwick) wants none of this and enlists a team to follow his prized director around in a RV. 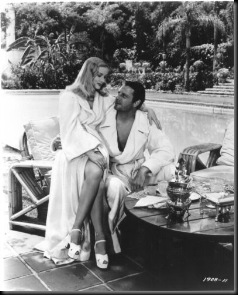 Of course, this would never work, and so Sully gets them to leave him alone after an incredibly wild, slapstick chase scene that would have made the Keystone Cops green with envy. Soon after this he meets a young Hollywood ingénue (Veronica Lake) at a diner who buys him a cup of coffee and some ham and eggs.  Down on her luck and wanting to escape the perils of the casting couch, the girl (really, she’s never given a name) becomes his traveling companion.  Even after she learns who he really is and that he’s involved in a “noble experiment” she continues on the road with him to soup kitchens and shelters.  Eventually they return to Hollywood and seem to be destined for happiness (if he can ever get a divorce from his harpy wife [Jan Buckingham]), but things go awry when Sully is mugged by a hobo and believed to be dead. 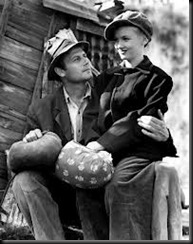 Okay, how can you start your film off with a rip-roaring, hilarious chase scene and then about halfway into the movie launch into a heavy social commentary about the hardships of the poor?  Heck, not only is it heavy, but it’s also silent.  That’s right, the master of witty repartee made a mini-silent film around the halfway mark of this movie.  Yes, it’s quite effective in conveying the despair of the downtrodden, but I thought this was supposed to be a comedy? What the hell?  And, then it goes back to being a comedy for a few minutes and the next thing I know Sully is working on a chain gang run by the father (Alan Bridge) of the Captain from Cool Hand Luke (1967) and Jess Lee Brooks is leading a black church congregation in singing “Go Down Moses” (i.e. the classic refrain, “Let My People Go”). Double what the hell? Can you see how 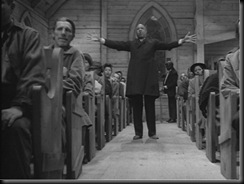 I found Sullivan’s Travels a tad uneven and in need of a bottle of lithium? I know Sturges was attempting to poke fun at the likes of Frank Capra and Leo McCarey, but he fell in league with them here with this script.  Perhaps this is why Sullivan’s Travels didn’t receive one single Oscar nomination.

Overall, the acting performances are quite good. McCrea is his usual even self, and I must admit, he does shine in the dramatic scenes.  Like any Sturges production, there are some stock character actors who steal several scenes. Robert Grieg and Eric Blore are delightful as 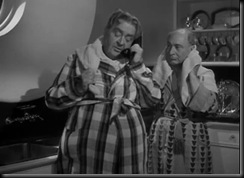 Sully’s servants. They had some of the best lines in the film. I wish they’d been in more scenes—perhaps some of the ones in which Veronica Lake stood around doe-eyed and pouty.  Not long after she said, “Give him some ham and eggs,” I couldn’t get over the fact that I knew both Sturges and McCrea grew to despise her over the course of the production.  To say that her acting range was limited would be kind.

I think I would have liked Sullivan’s Travels more if it had been more Ants in Your Pants and less O Brother Where Art Thou?—of course, I don’t mean the Coen Brother’s 2000 film starring my husband, Mr. Clooney. They named their film that in honor of Sturges and this movie, though.  I agree about Sturges…a little less about Sullivan’s Travels, though.