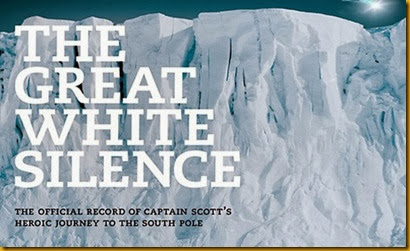 In the sake of full disclosure, I must admit that I cheated when it comes to watching director Herbert G. Ponting’s, The Great White Silence (1924).  I actually watched the 1933 reissued version of the film, which was called Ninety Degrees South and had sound. Documentaries can sometimes be difficult enough to watch with sound, so the idea of watching a silent one about an expedition to Antarctica and the South Pole just wasn’t all that attractive to me, especially since I knew there was a sound version of it. That said, the only sound in this movie was that of Ponting’s voice narrating what was already on 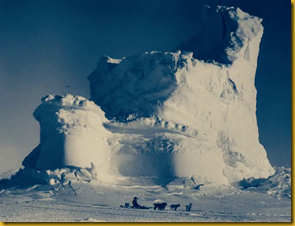 the title cards of the silent version, with a few personal asides.

Without a doubt, the best thing about The Great White Silence is the cinematography.  Ponting captures several breathtaking images of glaciers, icebergs, and various other ice and snow formations.  It is said that many of these images were obtained at great peril to his own life.  Knowing full well that 99.9% of the population would never be able to lay eyes on the pristine beauty of such a remote and desolate place, Ponting took great care in photographing the wonders of Antarctica.

Yet, geographic formations weren’t the only things Ponting filmed.  Of course, he made it a point to portray the hardships and recreations of camp life, too.  Only the English would brave arctic temperatures to play a game of 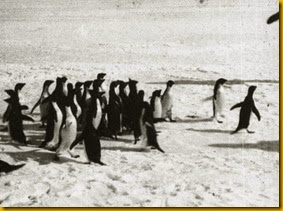 football (soccer to Americans) on the ice!  And, then there were the animals.  The Siberian ponies and sled dogs are given their due as well, but Ponting was especially enamored with the penguins and seals of Ross Island.  His depiction of these creatures was quite educational, and I learned a lot about how seals ward of killer whales and how penguins incubate eggs.  Oh, and we get to see Englishmen dance around with penguins, too.

The whole point of Captain Scott’s expedition was to make it to the South Pole before the Norwegian explorer Roald Amundsen.  Scott had brought Ponting along to take pictures that he would use on a lecture tour once he returned to England.  That lecture tour never happened because Scott and four others died on their return journey from the South Pole—which they had arrived at second, behind Amundsen.  We only have Captain Scott’s journal to tell us exactly what happened on this fateful trek, because Ponting did not accompany the group to the South 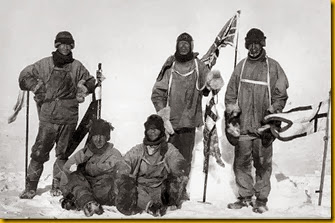 Pole, as it was determined to be too dangerous.  As such, the last half of the film is comprised of a lot of diagrams and still photography that was later recovered by the search party that found three of the explorers dead in a tent—one had died earlier and been buried and another had walked out into a blizzard to kill himself.

While The Great White Silence was pretty much a commercial failure, it is still of great historical importance.  Ponting’s images of Antarctica are a sight to behold. Yes, it gets a bit preachy at the end, when Ponting extolls the courage of Scott for having died for the honor of his country, but that was the English way.  Even though Ponting’s images are nearly 90 years old today, they are still remarkable.