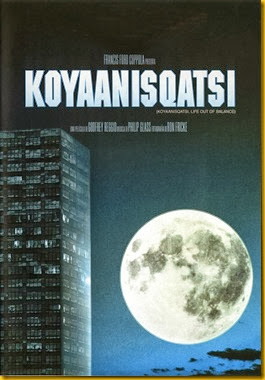 My regular readers know that I am quite adverse to avant garde cinema.  There are not enough words to describe how much I disliked such avant garde films as Flaming Creatures (1963), L'age d'or (1930), and Un Chien Andalou (1928). Yet, something miraculous has happened, I have found one that I liked—Koyaanisqatsi (1983). Director Godfrey Reggio’s unusual film about the intera 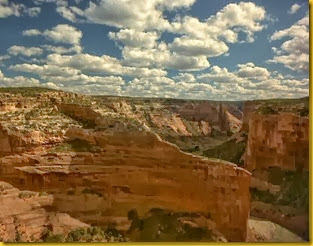 ction between nature, human beings, and technology has been described as visual tone poem.  It benefits greatly from being set to composer Philip Glass’ music, as well as the brilliant cinematography of Ron Fricke.

I can’t really explain what Koyaanisqatsi is about, since it doesn’t have a plot in the traditional sense.  It starts off with a cave painting and breathtaking shots of vast, pristine geographic formations.  I expect this was to showcase the beauty of unspoiled nature.  Slow motion and time-lapse camera work and editing capture some of the most spectacular images of landscapes that I have ever seen.  In addition, there are some pretty awesome sections of floating clouds—which come into play when Reggio gets around to depicting technology.

Once nature has had its due, Reggio turns to juxtaposing the simple but breathtaking beauty of nature against 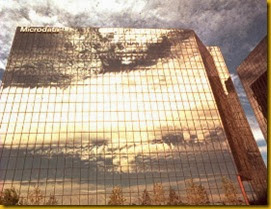 the world of technology: machines, transportation systems, and massive building structures.  It is not a coincidence that the Los Angeles highway system is displayed in such a way that it looks like an anaconda strangling its prey.  Nor, is it difficult to determine that Reggio doesn’t particularly like skyscrapers—with their mammoth faces blocking the clouds that so graciously reflect off the cold exterior of the buildings.  And, really, even though there is absolutely no dialogue in the entire movie, who couldn’t figure out that Reggio took great delight in showing the behemoth and derelict Pruitt-Igoe housing project in St. Louis being demolished.

But it’s not all nature and big, hulking building that gets Reggio’s attention—humans get their due, too. Still, we probably get the worst treatment, as we come off as pretty miserable.  Large crowds of primarily unsmiling people permeate throughout this section of the film.  We have become 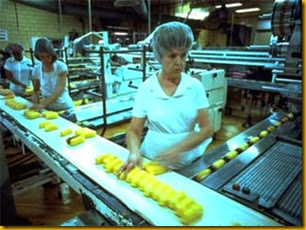 slaves to the technology that we’ve created, and mostly we come off as rats living in a maze of our own making. Personally, I could have done without the people, but I suppose Reggio’s overarching message would have suffered without us.

With skyscrapers eclipsing the beauty of the moon and the Hopi Indians prophesizing that, "Near the day of Purification, there will be cobwebs spun back and forth in the sky," I have no doubt that Koyaanisqatsi was a film with a message, no matter how much Reggio may have said that it was up to the “viewer to take for himself/herself what the film means." Generally, I agree with Reggio about the state of the world—life is out of balance and humans have committed ecological homicide. I also agree that we no longer control technology, but rather that it controls our every move.

Who knew I would actually enjoy watching avant garde cinema this much?  I may just have to watch the complete trilogy, Powaqqatsi (1988) and Naqoyqatsi (2002) to wrap my mind completely around Reggio’s ultimate philosophical endgame.