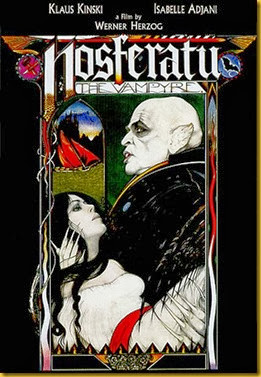 Director/writer Werner Herzog so revered F.W. Murnau’s classic 1922 silent film, Nosferatu: Symphony of Terror, as the greatest German film ever made that he remade it in 1979 and called it Nosferatu: Phantom of the Night. Unlike Murnau, Herzog had more freedom to base most of his film on the Bram Stoker novel. He didn’t have to change character names (even though he chose to name the heroine Lucy instead of Mina) and could follow the novel much closer.  Yet, he still chose to base his story in Germany (as Murnau had), and he humanized his Count Dracula far more than Stoker ever did. Like most fans of the original film, Herzog was mesmerized by the interplay of shadow and light that Murnau employed.  As such, he imitated many of the most iconic shots in the original, and created a mesmerizing visual treat. 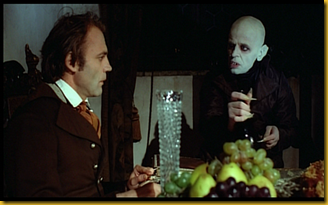 his beautiful and devoted wife Lucy (Isabelle Adjani) in Wismar to travel over the Carpathian Mountains into Transylvania to present Count Dracula (Klaus Kinski) with a deed for a house. Even after being warned by countless gypsies and reading books that tell the ill-fated story of those who cross the path of Nosferatu, Jonathan still chooses to dine with the Count and stay in his creepy, dilapidated castle. After seeing a locket with a picture of Lucy, the Count decides to incapacitate Jonathan by sucking his blood. Along with ten black caskets and countless rats, he travels via boat to Wismar—wiping the entire crew out on the voyage.  Much of the same befalls Wismar as well, and only Lucy seems to know that Count Dracula is to blame after a feverish and amnesic Jonathan returns.  To rid the town (and perhaps the world) of the pestilence that is Dracula, Lucy sets out on a collision course with fate.

The biggest difference between Murnau’s and Herzog’s films, of course, is that there is spoken dialogue.  Still, for the most part, the dialogue is sparse and only serves to move the story along.  Who needs a bunch of jabbering when you have atmosphere, anyway?  This works in Adjani’s favor, as her vacuous, but beautiful, looking face says so much more about her situation than any words ever could.  She looks and acts like a somewhat willing bride of Dracula. 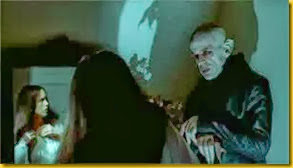 If you read my review of Murnau’s Nosferatu, then you know I believe there was no greater Dracula than Max Schreck.  Still, Kinski does his best job to imitate the master.  He looks and moves much the same way as Schreck, but he also had the opportunity to use words to express his character’s anguish of immortality.  Like Schreck, he is eerily creepy and unpleasant to look at.  Overall, he does a fine job of mimicking Schreck’s performance.

Still, what I most remember about the movie are the images Herzog and cinematographer Jorg Schmidt-Reitwein create.  Throughout the film they chose to frame and light scenes in which Kinski’s glowing, white face is the only thing that can be seen.  And, just as Murnau chose to create shadowed images of Dracula as he prowled the streets of Wismar, so does Herzog. Perhaps the most striking image is the recreation of the first face-to-face encounter 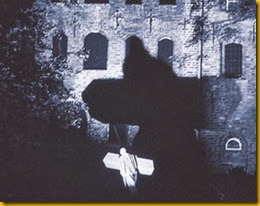 between Lucy and Dracula, where his shadow looms over her first in a tight-quartered bathroom and then later in her bedroom.  These images alone are worth the price of hearing Renfield’s (Roland Topor) cackles.

Overall, Nosferatu: Phantom of the Night is a visually striking film, bolstered by a fine cast.  However, it does lack originality—as Herzog heavily imitated Murnau’s work.  Making a remake of an admired film has its pitfalls, and I expect Herzog’s admiration for Murnau’s film overshadowed his own ability to truly make his own movie—although he did give Dracula a bit more humanity than previously seen.