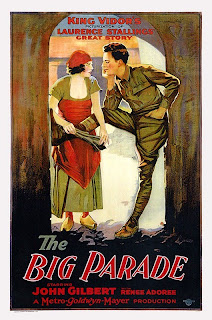 Why is this 1925 King Vidor classic the top-grossing (worldwide) silent film of all time? I suppose people were willing to pay the price of admission to see one of the most realistic war films of the silent era.

Released just eight years after the end of the Great War, this film follows the story of Jim Apperson (played by John Gilbert) from reluctant volunteer to disabled war hero. Jim is a bored, rich young man who allows his naive fiancée to convince him to enlist. Off to war and quartered in France, Jim befriends Slim Jensen and Bull O’Hara (no relation to Scarlet) and falls for French shop girl Melisande. She’s easy on the eyes, but what makes her really attractive to Jim is t 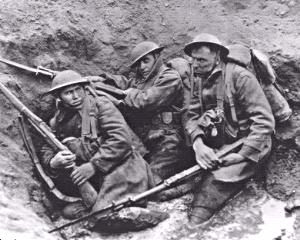 Later on his unit is ordered to the front at Belleau Wood. The battle scenes are elaborately designed and heart-wrenching to watch. When they get bogged down in No Man’s Land, surrounded by snipers and a machinegun nest, the commander orders Jim, Bull, and Slim to take out the nest. Slim goes first and takes out the nest, but on his way back he’s injured and lies in the battlefield moaning in agony. This is too much for Jim and Bull and they try to rescue him, but Bull is killed and Jim is shot in the leg. Jim becomes enraged—comparable only to the rage of a man who has been stood up at the altar by a Swedish beauty. Anyway, this is where one of the more memorable scenes takes place. Jim stalks a German sniper into a trench and is about to slit his throat when the German motions for a cigarette. Compassionately, Jim gives him one and soon the soldier dies right next to him.

Later Jim is rescued by a Red Cross truck and while recuperating in the hospital he learns that Melisande’s village has been bombed. He grabs a crutch and hitches a ride on a truck. He finds Melisande’s village leveled and as he’s calling out for his love the town is shelled again. Jim is injured again in the leg, so much so that it is amputated. Returning home crippled he finds his finance in love with his brother and he returns to France and is reunited with Melisande.

The battle scenes in this film are great. This is not a sanitized view of war. The drudgery, cruelty, and mind-blowing death and destruction that encompass war are realistically depicted. John Arnold’s photography is superb.

This film literally reinvigorated the public’s interest in war films. If you are a fan of such films as Saving Private Ryan or Paths of Glory you must watch this film. A true cinematic gem from the silent era.
Posted by Kimberly J.M. Wilson at 8:24 PM