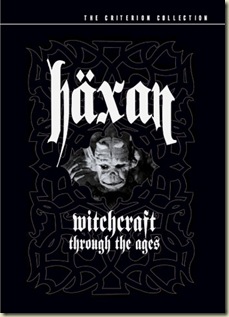 A cult movie in more ways than one.

Shown as a Witching Hour film since the 1960s, this 1923 Ben Christensen silent docuhorror (I think I just made this genre up) is a study of witchcraft through the ages. It's supposed to be a "documentary", but I don't know how realistic one can truly be when it comes to filming reenactments of the Devil & Co. I can just imagine the outrage the release of this film caused in strict-Lutheran 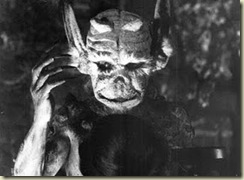 Sweden and Denmark! In America, a Variety reviewer said this about the film: "Wonderful though this picture is, it is absolutely unfit for public exhibition." Satanism, overt sensualism, and a bit of nudity were just too darn much for 1923!

While the story is not bowl-you-over compelling (though it is both spooky and comical at the same time), the set design, makeup, costumes, and lighting are imaginative. And who doesn't love a story with the devil, horns and all, seducing young women? An interesting film to watch, sober or otherwise.
Posted by Kimberly J.M. Wilson at 3:14 PM