Oh, German expressionism, how I love thee let me count the ways. This 1919 German horror (yes, I said horror) classic is without a doubt one of the all-time best international silents ever made. Directed by Robert Wiene (with a little help from Fritz Lang), this film is off-the-hook crazy.

The title character, Dr. Caligari (played by the spooky Werner Krauss), is a would-be hypnotist who travels around Germany performing shows with his sleepwalking minion Cesare. Quite simply, Marilyn Manson is the modern day twin of Cesare in both appearance and overall creepiness. Some murders take plac 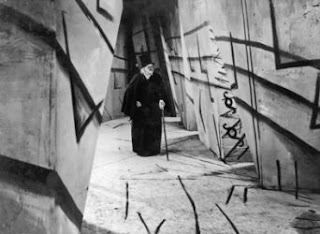 e and the story's hero/narrator, Francis, suspects Dr. Caligari and Cesare are to blame. In a twist that M. Night Shyamalan has an altar set up to for inspiration, it is revealed that Dr. Caligari isn't really criminally insane, but rather Francis--who is telling the story from his reserved spot in an asylum. The music that is played during this revelation makes the hair on your arms stand on end.

As if the story itself isn't strange enough, the set design is a psychological marvel. Expressionistic art is in the forefront of every scene. The scenery 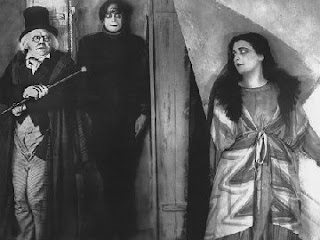 is misshapen and unrealistic--it is another story unto itself, mocking the idea of what reality actually looks like. Film school dissertations have been written on what set designers Warm, Reimann, and Roehrig were actually trying to convey about the realm of the real and unreal.

If you call yourself a silent film fan, you should have this film in your library. Browning and Whale fans should see many similarities with their films and this one. This is definitely a film that is worthy of being watched.
Posted by Kimberly J.M. Wilson at 12:00 AM