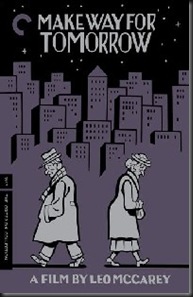 Let me start off by saying that I don’t like this movie. It isn’t because the acting is bad—it’s quite good, actually . And, it has nothing to do with poor writing--Vina Delmar’s screenplay is indeed superb.  Perhaps it is because it lacks a strong directorial hand—no, that can’t be it, either, because Leo McCarey does a fine job as well. In fact, this is most probably one of his strongest films—he thought it was the strongest of all. So, what is it that I don’t like about this film?  Quite frankly, it’s despondently depressing.  It was like watching Soviet Realism with a bottle of vodka and a handful of Quaaludes. Now, don’t think I don’t like downer films—The Hours (2002) is one of my favorite films, and anyone who has seen it knows it has its Zoloft moments. Yet, the depressing difference between the The Hours and Make Way for Tomorrow (1937) is this: there is some light at the end of the tortured tunnel with The Hours. There is only darkness in the end with Make Room for Tomorrow.  The film haunts me, and not in a good way.

Victims of the Depression and callous children, elderly couple Barkley and Lucy Cooper (Victor Moore and Beulah Bondi) find themselves separated from one another when they lose their house and have to go live with their adult children.  They have FIVE children, but none of them can take both parents into their homes.  Really? 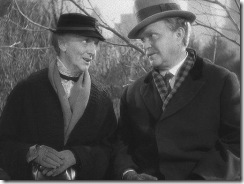 Somebody couldn’t roll out a cot or let one of them sleep on the couch?  And, if that wasn’t bad enough, then they are faced with the fact that they aren’t even wanted individually. One son’s wife convinces him that they need to put Lucy in a rest home; and, a daughter convinces Barkley that he should move to California and live with another daughter because the climate will be better for his health.  It’s difficult to believe that these two sweet, old people could have raised such ungrateful children. I’m sure this is the root reason why I don’t like this film.  I would NEVER treat my parents like this, but I know countless others who would and they make me physically ill.  The film is just too realistic a portrait of selfishness on an unfathomable level.

I would like to say that the only enjoyable part of this movie is when the couple reunites for one day before being shipped off to their separate destinations. They visit all the places they went on their honeymoon fifty years earlier and are unabashedly happy to be with one another.  They get better treatment from the strangers they meet out that day than they could ever get from their children. Yet, alas, even this slight respite from despair is ruined when the couple part ways at the train station.  They, and you the viewer, know that this is the last time they will EVER see one another.  I’d rather watch Ed Harris jump out that window in The Hours one-hundred times than watch this pitiful couple say their final goodbyes “just in case something happens.”  I really felt ill after I watched this. 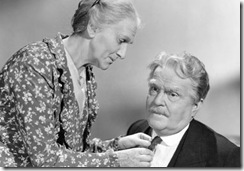 Both Bondi and Moore are heartbreaking in their roles. I suppose I could blame their too spot on portrayals for my displeasure with the movie, but that doesn’t seem fair.  I find it hard to believe that neither was nominated for an Academy Award—in fact, the film garnered no nominations at all. Really?  Luise Rainer wins for portraying a Chinese peasant with a really bad accent in The Good Earth, but Beulah Bondi, who personified a granny put out to pasture, doesn’t even get nominated?  Funny thing, when he won the Oscar for Best Directing for The Awful Truth (an excellent film, by the way) McCarey said thanks but that he got the award for the wrong film.

Final verdict: if you really love your parents don’t watch this movie.  It will make you angry and depressed.  Still, if you are someone who wouldn’t think twice about dropping them at the “home” and visiting them only on holidays (if that), please watch this film to see how loathsome you really are. If I have offended anyone with this—Good.