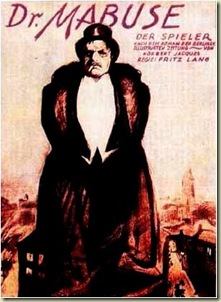 Germany, 1922: inflation is running wild (people took wheelbarrows with them to collect their wages and buy bread), a little known man is just a year away from his first attempt at a fascist revolution in a beer hall, and Germans are flocking to see Fritz Lang's Dr. Mabuse, Der Spieler (The Gambler).

The film follows the hijinks of a master criminal, Dr. Mabuse, who is also a master of disguises: gambler, innkeeper, businessman, stage performer, psychiatrist, etc. He is no run of the mill criminal, though. His crimes range from, just to name a few, theft, collusion, kidnapping, false impersonation, and murder. Broken into two parts, the first part of the film introduces the audience to this unrepentant rogue and his criminal counterparts. The second part of the film exhibits the depravity of Dr. Mabuse and his decline into full-force madness. The end of the film is extra creepy, as machines and statues come to life in Mabuse's mind--the special effects are advanced for the time.

German audiences loved this film. Why not? The film is just as dark and bleak as most of their lives were. Just like Mervyn LeRoy's I Am a Fugitive from a Chain Gang is a great American representation of the Depression, Lang's Dr. Mabuse is a great example of the German mindset in the early 1920s. Hitler didn't just pop out of nowhere in 1933--he'd been plotting since the end of WWI in 1918.

A classic silent that is a good illustration of the time period in which it was made. In addition, there's a bit of nudity thrown in for shock value.
Posted by Kimberly J.M. Wilson at 6:07 PM