Members of PETA beware--this is not the film for you.

Is it a true documentary or not? That is the question that has plagued many over the years. If you're like me, you first saw this 1922 Robert Flaherty silent in a film history class. An endless debate was held in my class as to whether the filming looked "too staged" to be a true representation of the life of an Inuit family. Perhaps it was staged at times, but I still think Flaherty does a nice job of showing what daily survival was like for Nanook and his family. I still get the shivers when I think of all that ice and snow! 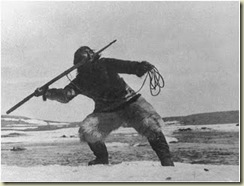 I'm mostly impressed with Flaherty's camerawork in harsh weather conditions. He was not working with state of the art equipment and he was pretty much the film crew. The walrus hunt and igloo building scenes are interesting to watch. Of course, what most people remember about this film is the closing shot where Nanook's family is looking for shelter against a snowstorm. In an odd twist of fate, they died soon after filming was completed doing just this.

Not exactly an exciting film, but still an interesting one to watch.