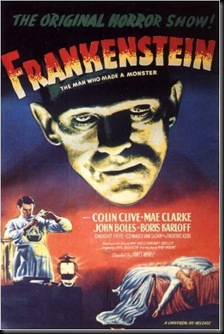 After a record-breaking nine-year reign as the Sexiest Man Alive Max Schreck sadly found himself dethroned in November 1931 by a green-faced monster: Boris Karloff. Upon hearing the news, Max cried, “Oh, die Unmenschlichkeit des Ganzen!” while Boris wondered, “I wonder if I’ll have to do more B-pictures if this is a hit?” Oh, Boris, the inhumanity of it all!

Based on Mary Shelley’s 1818 gothic novel of the same name, this 1931 classic horror film was directed by James Whale (see Gods and Monsters, really, see it!) and produced by Paramount. It is considered by many critics as the most important horror film ever made.

The opening shot has Edward van Sloan stepping from behind a curtain to warn the audience that the film might thrill them, but that it might horrify them as well. Most audience members laughed and wondered what could be more horrifying than the Depression. When the curtain lifts they find the somewhat touched Dr. Frankenstein (Colin Clive) and his hunchback assistant, Fritz (Dwight Frye), robbing a fresh Transylvanian (evidently the birthplace of all movie monsters) grave. The doctor needs fresh corpses for his experiments about the secrets of life. On their way home they encounter a criminal hanging from the gallows and the doctor decides he wants its brain. When Fritz cuts him down the doctor observes that the criminal’s brain is useless due to his neck being br 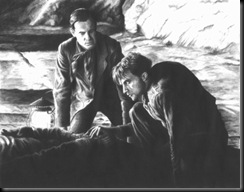 oken. Okay, Frankenstein is supposed to be a doctor, so shouldn’t he have already known that since the body was executed by hanging? He evidently went to Grenada for his medical degree. Anyway, this presents the problem of a brain. Frankenstein dispatches Fritz to Goldstadt Medical College to steal one.

Upon reaching Goldstadt, Fritz finds himself watching Professor Waldman (Edward van Sloan) dissecting a psychopath and lecturing his students about the differences between a normal brain and the abnormal brain of a criminal. After the class is over Fritz steals a jar containing the normal brain, but when he drops it he has to take the jar with the criminal’s brain.

Meanwhile, friends are planning an intervention for the doctor. Evidently, his fiancée, Elizabeth (Mae Clark) and Victor (John Boles) are worried that he has become emotionally unstable—if they only knew! They decide to go talk to Dr. Waldman (Frankenstein’s former teacher and mentor before he got booted out of Goldstadt for his overzealous need for corpses). The doctor is greatly disturbed by Victor and Elizabeth’s news of Frankenstein and agrees to visit Frankenstein manor with them.

The next scene opens on a stormy night outside Frankenstein’s watchtower laboratory. Inside, we see that the doctor has stitched together different parts of various corpses to create a human body. Okay, why couldn’t he just use one slightly damaged body and make repairs on it? Really, Joan Rivers does it all the time! Nevertheless, 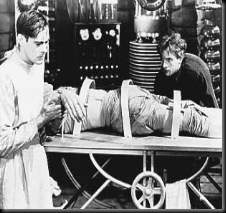 Frankenstein has built a machine that will use the electricity from a lightning storm to put electricity into the monster's body via electrodes in the neck. I have to say, I found all the gadgets in his lab interesting to look at. When Frankenstein tells Fritz to throw the switches and all the sparks fly it is pretty cool.

As fate would have it, just as they are making the final preparations they hear incessant knocking on the door. When Fritz looks through the door window he finds the intervention crew. Fritz impolitely tells them to go away, but Frankenstein gives in when Elizabeth begs him to give them shelter from the storm. After he can’t get them to leave him alone so he can conduct his experiment, he invites them up to his lab, locking the door behind them. They have front-row seats to watch the body hoisted through an open skylight and into the electrical storm. At first when the table is brought back down into the lab the body doesn’t move, but then a hand twitches and Frankenstein starts shouting his most famous line, “It’s alive!” Well, it was, but it takes it awhile to come fully to life. This gives Dr. Waldman time to try to convince Frankenstein that his creature is dangerous. Frankenstein explains that Fritz stole a normal brain from Waldman’s own lab to avoid any danger. Imagine both doctors’ shock when Waldman tells him that a criminal brain was stolen instead. Somehow this doesn’t disturb the already disturbed Dr. Frankenstein and he’s ready for the great reveal of his monster, who has been kept in total darkness up to this point. 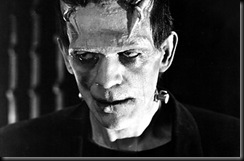 This brings us to one of the more memorable scenes of the film: when the monster makes his first appearance. At first appearing as a large silhouette, then as an entity with a huge head and back, and then the camera jumps when it goes in for a close-up of the disfigured face—with the prominent jagged scar and vacant look. Quite simply, Karloff’s monster is gruesome looking.

We soon learn that the monster is mesmerized by sunlight, but terribly frightened by fire. When the monster reacts violently toward a lit torch carried by Fritz, he has to be shackled to the wall of the dungeon. Fritz, fitting the psychological profile of an often tormented weak person, sees the monster as someone he can now have power over. Thus, he starts to mistreat the monster by whipping him and teasing him with fire. Later, the monster will kill Fritz off-screen. When Waldman and Frankenstein go to the cellar the monster turns on them and the two doctors decide to inject a poison into him. They sedate and render him unconscious, but before they can put him down with poison Dr. Frankenstein’s father shows up and they have to hide the monster. Baron Frankenstein takes his mentally exhausted son away with him, while Dr. Waldman is left to destroy the monster. Before he can do this the monster awakens and strangles the doctor to death and escapes into the outside world. 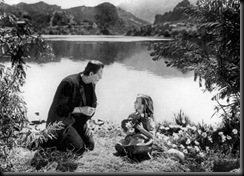 Meanwhile, back at Frankenstein Castle, Frankenstein recovers and he and Elizabeth plan to marry, believing Waldman has taken care of the monster. While the town is drinking and dancing to the forthcoming marriage, the monster is freely roaming the countryside. This is where he meets little Maria picking daisies by a lake. Instead of being afraid of the monster, she asks him to play with her. They throw daisies into the lake and watch them float. When his hands are empty he is puzzled and he innocently picks Maria up and throws her into the lake—she doesn’t float.

Just prior to the wedding ceremony, the happy couple learn about Dr. Waldman death and the monster’s escape. Somehow the monster finds himself in Elizabeth’s room, but is scarred away by her ear-piercing screams. Soon Maria’s father is seen carrying his dead daughter through the streets, crying for vengeance for his daughter’s murder. The townspeople form a mob to hunt down the monster. With torches and pitchforks, the villagers and Frankenstein set off into the dark woods. Frankenstein comes face-to-face with his creation and finds himself beaten and dragged into an abandoned windmill. After an ensuing struggle, the monster throws Frankenstein from the top level of the windmill. Fortunately, a turning windmill blade breaks his fall. After Frankenstein falls safely to the ground, the villagers set the windmill on fire with the monster trapped inside. He cries out in vain and is eventually trapped underneath a fallen beam—presumably dead as flames fully engulf the windmill…but not really, see The Bride of Frankenstein. 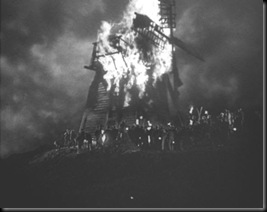 When I used to teach middle school I always showed this film at Halloween. You would think kids today would find this boring, with it being in black and white and not at all gory. Yet, they always seemed to enjoy it. I even had some girls who cried when the monster died. I think this is a good testament to the timelessness of this film.

While the story doesn’t follow Shelley’s novel as much as one might like, it is still a compelling tale that wades between the light and dark sides of creation.

Boris Karloff does a wonderful job portraying the monster. He runs the gamut of emotions in this role: fear, bewilderment, anger, happiness, and sadness. I also think Colin Clive and Dwight Frye are entertaining as the crazy Dr. Frankenstein and the sadistic Fritz. The rest of the cast are passable, but not overwhelming.

The camerawork was very inventive—especially the scenes depicting the monster for the first time. In addition, the overall imagery of the film permeates Gothicism. James Whale put his artistic talents to good use here.