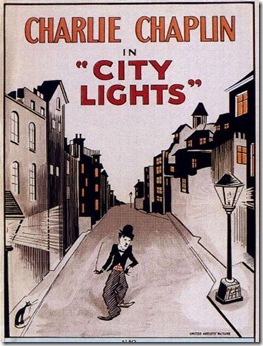 I suppose Charlie Chaplin had never heard the adage “silence is deadly” before 1931. He soon heard it from Academy voters when it came time to nominate the best films for that year. It would seem that people were a bit testy that some British chap didn’t want to showcase his wonderful accent and prove to everyone that the most famous actor in the world wasn’t too big for talkies. He was.

Many critics view City Lights as Chaplin’s greatest film. I don’t agree with this assessment, as my choice falls on Modern Times, but it is one of his best productions. He was involved in all elements of the production: direction, editing, music, and screenplay. To say that Chaplin was an all-around gifted artist would be an understatement.

I’m not sure, but I suspect that the opening scene was all Academy voters needed to see before making their minds up about this picture. Using kazoos and other irritating noises as voices most probably didn’t go over well. Whatever may be the case, we find the Little Tramp sleeping in a just unveiled statue at the start of this film. The on looking crowd is aghast—he has sullied the purity of the statue! 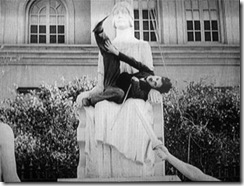 When he tries to remove himself from the statue he finds himself hooked, by the back of his pants, to a sword. In a comic turn of events, he has to listen to the “Star Spangled Banner” (hat off, in respect of course) while in this unpleasant position.

Later, we find the Tramp trying to elude a motorcycle cop by entering and exiting a parked limo. This is where he first encounters the blind and beautiful flower girl (Virginia Cherrill). She seems to know the sound of a slamming limo door, and so she assumes he’s a rich man and offers him a boutonniere. He pays for it with his last coin 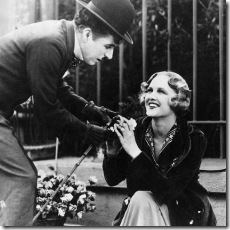 and pretends to leave. While she goes on with her flower duties he watches her. In a bit of anti-stalker justice, she throws her dirty bucket of water on him.

Next, we meet the besotted and depressed millionaire (Harry Myers) as he’s trying to drown himself in the river. The Tramp tries to dissuade the man from this and finds himself accidentally caught in the rope and pulled into the river. Eventually both men rescue one another and the millionaire names the Tramp his friend for life. The millionaire invites the Tramp back to his mansion and they drink a champagne toast to their newfound friendship. Too bad the millionaire becomes depressed again when he learns his wife is divorcing him. Again he tries to off himself, via revolver this time, but the Tramp stops him and they decide to go out for a night on the town. Many outlandish things occur, most notably the Tramp setting a lady’s dress on fire with a cigarette butt and then putting the fire out with seltzer water. Of course, what most people remember about this part of the film is the spaghetti-confetti sequence. Trying to eat his spaghetti, the Tramp takes confetti strings for strings of pasta. And so he sucks

and sucks and sucks some more trying to find the end of the noodle—perhaps this is where the Olive Garden got its idea for the endless pasta bowl?

After a perilous ride back to the mansion, the millionaire gives the tramp his Rolls Royce. When he sees the flower girl he gets the millionaire to loan him money to buy flowers. He catches up with her and pays $10 for her entire basket and then drives her home in the Rolls. She is convinced he’s a millionaire and he doesn’t try to change her opinion. When he returns to the mansion the millionaire is sober, but can’t remember the Tramp and he’s thrown out. Don’t worry, the millionaire is soon drunk again and the two reunite and a party is thrown in the Tramp’s honor. Yet, when they wake up the next morning together in bed, the Tramp is kicked out again. This seems like some sort of sick booty call ritual, doesn’t it?

After learning that the flower girl is ill, the Tramp decides he will find the money to pay for a doctor to help her. With the money he earns as a street cleaner, he takes food to her. On one of these trips he reads a newspaper article about an eye specialist who can cure blindness. The girl is overjoyed, the Tramp is a bit anxious. When he is fired for returning late to work the Tramp sees an advertisement for making “easy money” outside a boxing arena. Believing he’s in a fixed fight, the Tramp agrees to a $50 winner takes all match. The problem is his opponent is changed from a lightweight to a muscle-laden beast (Hank Mann). The fight sequence is the best part of the film. 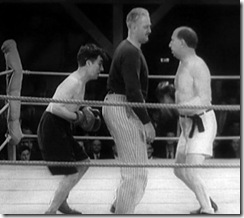 It is a masterfully (and hilariously) choreographed. Watching the Tramp dance around the ring, hide behind the referee, and duck at the last moment to avoid punches is an extreme pleasure. You combine these antics with the ring bell gag and you find yourself hurting from laughing so much. Alas, in the end, the Tramp is knocked out cold—no $50 for the operation.

Trying to figure out what to do next, the Tramp happens upon the millionaire again. He’s drunk, so naturally he recognizes the Tramp and invites his friend back to the mansion. When the millionaire learns about the girl he gives the Tramp $1,000. Unfortunately, robbers are stationed in the house and knock the millionaire out. Yet, they don’t take the money from the Tramp. When he calls the police he is viewed as a thief—especially with $1,000 in his pocket. Again, when the millionaire wakes up he doesn’t recognize the Tramp and accuses him of theft. The Tramp runs out with the money and later gives it to the blind girl. He tells her he’s going to be gone for awhile and then leaves—all the while she still thinks he’s a millionaire. The police pick him up and he gets 9 months in prison.

When he returns he finds the blind girl’s sight has been restored. She gets to watch and laugh as newsboys taunt him. In a moment of regret, she offers him a white rose to replace a wilted flower he picked up in the gutter. When she presses a coin into his hand she recognizes his to 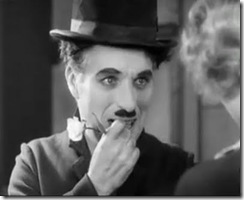 uch. In a very emotional scene, you watch as both (in extreme close-up) experience a multitude of emotions. In the end, she accepts him for who he is as he asks her if she can see now and she answers, quite truthfully, “Yes, I can see now.” What a way to end a film!

The performances of Chaplin, Cherrill, and Myers are superb. Myers does an excellent job of playing two very different characters: uproariously funny drunk and dour, sober millionaire. It is difficult to play a blind character, but I think Cherrill pulls it off well. And, of course, Chaplin is great as usual. That final scene is a testament to how powerful silent acting can truly be.

The gags are fabulous. I am partial to the boxing scenes, but there are countless others that showcase Chaplin’s comic timing and genius. He, Keaton, and Lloyd were masterminds when it came to plotting side-splitting sight gags.

Overall, this a true cinematic gem. Perhaps even more so because it was one of the last great silents made. Chaplin took a great risk in making this film, but it paid off in the end.