Ever wondered why people stopped riding trains? Look no further…

Buster Keaton directs and stars in this 1927 silent classic about train engineer Johnnie’s quest to save his beloved train engine (The General) from the damn Yankees!

After it is determined that Johnnie can’t enlist in the Confederate Army because his engineer skills are too important, his girlfriend, Annabelle Lee (no, not the Poe one), dumps him, thinking he’s a coward. Later the damn Yankees come up with a dastardly plan to sabotage the Confederate railroad and guess whose train they decide to use? Since films are all about coincidence, you may be surprised to hear that Annabelle is a passenger on the General the same day the damn Yankees put their plan into action. 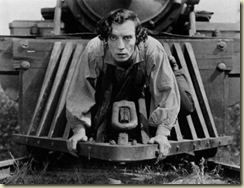 During a dinner break, the Yankees steal the engine and luggage car (with Annabelle in it, of course). Johnnie chases after them via a hand-operated car and then a bike. Since Johnnie isn’t more powerful than a locomotive he can’t keep up, but he does reach a Confederate camp that needs an engineer to transport soldiers. Unfortunately for the Confederacy Johnnie’s an idiot and forgets to attach the troop car—and the South wonders why it lost the war! In route to rescue the General he fights off self-inflicted cannon blasts, disconnected cars, and logs. When he reaches enemy territory (damn Yankees!), Johnnie ditches the train and takes refuge in a house during a storm. Coincidence pops up again, and a hiding Johnnie overhears the damn Yankees plan for the next day and that Annabelle is a prisoner. Donning a damn Yankee uniform (OMG!), Johnnie rescues his girl and smuggles her onto the General and rushes to warn the Confederates about the damn Yankees. With the damn Yankees in pursuit, Johnnie sets a bridge on fire and makes his way to Confederate headquarters. Next, in one of the more astonishing sequences in silent film history, we see a damn Yankee supply train plunge into a river and Johnnie take out a dam with misfired cannon that washes away countless damn Yankees. Mistakenly thinking Johnnie is brilliant, the Confederacy gives him a commission and Annabelle and he walk off into the sunset…or they would have if it hadn’t been for those damn Yankees! No doubt she ended up wearing curtains and he and his train were blown up by that bastard Sherman. Damn Yankees!

This is considered Keaton’s masterpiece. The film itself is based on a true story (with many artistic liberties taken by Keaton) and Keaton does a wonderful job staying true to the historical time period in which the film takes place. The gags are outrageously funny and Keaton is brilliant as ever in pulling off his physically-daring stunts. One of his longer films at 75 minutes, the story has good pacing and is wholly enjoyable.