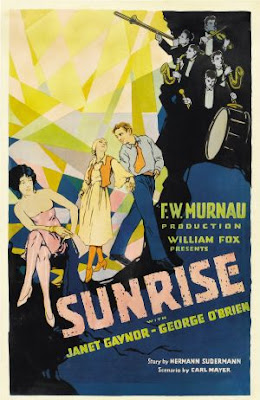 Catchy tune, eh? Too bad the musical directors of this 1927 Oscar-winning, silent classic from F.W. Murnau weren’t as clever as me—they could have made a fortune selling records to two-timing husbands looking to get rid of doe-eyed wives!

The crux of this story is a simple one: a married farmer (George O’Brien) falls for a seductive city girl (the outrageous Margaret Livingston) who convinces him to sell his farm and run away to the city with her…oh, and for good measure drown his wife (Janet Gaynor in an Oscar winning performance) in the process. What follows is one of the most riveting stories ever told in silent film history.

After making the necessary preparations for his wife’s demise, the farmer takes his wife on a rowboat trip. Wh 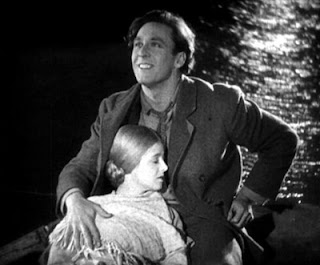 ile rowing across the lake he menacingly glares at her and imagines throwing her overboard. He then stands up and is just about to take action when a ringing bell stops him. After they reach the shore the fearful wife jumps out of the boat and runs for her life. When the husband catches up to her he assures her there’s nothing to fear. After taking a streetcar into the city the wife runs into the street and is rescued by her husband from an oncoming car. Trying to assure her of his love, he buys her sweets and flowers. They then go into a church where a wedding is taking place and the husband is wracked with guilt. After leaving the church, the couple’s love appears reborn and they engage in a number of loving activities. Later, while they are rowing back home a storm strikes up and the man ties bulrushes to his wife to ensure her safety. The boat capsizes and the man swims to shore only to discover that his wife is missing. After seeing bulrushes drift ashore without his wife the man believes she’s dead. He then rushes home and is overcome with anguish. The other woman gleefully appears and is shocked when he chases her out of the house and begins to strangle her. Luckily for her, the husband hears that his wife has been found and he races home. Just as the sun rises the wife wakes up and kisses her husband.

The story itself is wonderful, but what makes this film great is the photography of Charles Rosher and Karl Struss. Every image in this film is masterfully framed, lighted, and shot. Of course, the final image of the husband and wife kissing at the break of sunrise is what most people remember, but there are countless images just as beautiful as this last one, especially the rowboat scenes. Other notable accomplishments for this film are the use of sound effects and double exposures.

It is difficult to believe that this film was a box-office failure. Yet, when you look at box office trends today you do see that absolute trash makes loads of money whereas films of merit often do poorly. Whatever may be the case, this film is one of the greatest silent films ever made in America.