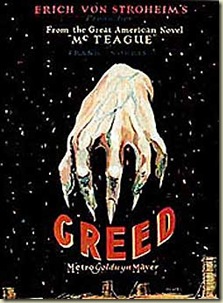 One of the seven deadly sins of Irving Thalberg.

Eric von Stroheim directed this monolithic 1924 film about the rise and fall of John “Mac” McTeague. Originally the film was over 9 hours long, von Stroheim cut it to 4, but that wasn’t enough for Thalberg, who had it cut again to just over 2 hours. There is a restored version with stills that attempts to restore it to 4 hours, but it’s difficult to find.

The story follows the life of non-licensed dentist McTeague as he falls in love with Trina (Zasu Pitts), the girl of his best friend, Marcus. After Marcus steps aside the couple marries and she wins $5,000 from the lottery. This is where greed comes into play. 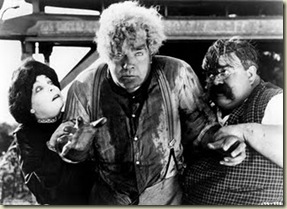 Marcus, now jealous that McTeague is married to $5,000, reports McTeague’s lack of a license to the authorities. McTeague is forced out of business and looks to his wife for financial help. The problem is she’s a hoarder, who likes to roll around naked in her money but not spend it. So, McTeague must work manual labor jobs and the two of them live like paupers. Eventually McTeague snaps and kills Trina and flees to the desert with her gold. Marcus follows him and a showdown occurs. Marcus is killed, but not before McTeague finds himself handcuffed to the corpse. Attempting to drag the dead weight behind him, McTeague succumbs to thirst and dies.

Von Stroheim was looking to make the most realistic film possible and he does a very good job. The film is shot entirely on location in San Francisco and Death Valley, so the sets are as authentic as they come. If you want to see what downtown San Francisco looked like in the early 1920s—watch this film. Most of the lighting is entirely natural, which gives the film a stark look at times. The story itself is both compelling and creepy. The depths of Trina’s greed are something to behold. When you watch the closing scenes between Marcus and McTeague in Death Valley you might actually begin to sweat yourself.

An entertaining film to watch--if you can find it.