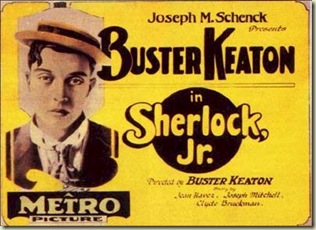 So, if I said Buster Keaton is the most gifted actor/stuntman ever would your response be, “No, s*#t, Sherlock?

This 1924 silent starring Keaton is one of his top five performances. Under an hour long, the film moves at an extremely fast pace. In the film, Keaton plays a projectionist and aspiring detective, who is framed for the theft of his would-be father-in-law’s watch by his 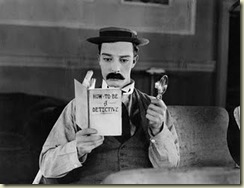 romantic rival (Ward Crane.). Later, while attending to his job at the theatre, Keaton falls asleep and finds himself in a dream where he is the second greatest detective in the world: Sherlock, Jr. His dream alter ego must solve the case of the missing pearls before the dastardly villain kills him. In the end, Buster solves both cases and the lovers are reunited.

The stunts in this film are usual Keaton—amazing. His ride on the motorcycle handlebars is priceless. The dual storyline—real life and reel life—is a clever plot device as well. In this regard, Woody Allen’s The Purple Rose of Cairo owes a nod to Keaton.

An entertaining, exciting, funny film. A must see for silent film fans, and of course, Keaton fans.