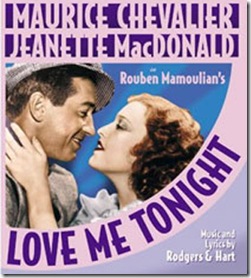 But what about tomorrow?

Directed by Rouben Mamoulian, this 1932 romantic musical set the bar very high for subsequent musicals. Many critics cite it as one of the greatest and innovative musicals of the 1930s. Song and dialogue are cleverly woven together to tell the unlikely love story of a very frustrated Princess Jeanette (Jeanette MacDonald) and a handsome Parisian tailor named Maurice (Maurice Chevalier).

The beginning of the film is unforgettable, with a symphony of noises that captures the sounds of an awakening Paris and Chevalier singing “That’s the Song of Paree”. We learn that Maurice has just completed a job that will establish him as a first-rate tailor: 15 suits for the Viscount de Varese (Charlie Ruggles). The problem is the viscount can’t pay h 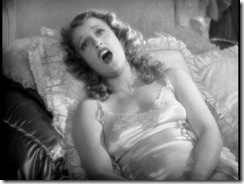 is bill, as he is financially dependent on his uncle the Duke (C. Aubrey Smith). While discussing his problem with his friend Emile they get on the topic of love and Maurice begins singing, “Isn’t It Romantic?” This launches one of the greatest musical numbers to grace the silver screen. Because the tune is so catchy it sticks in Emile’s head, and when he leaves the shop he starts humming it and as he does this it is picked up by a taxi driver and his composer passenger, who takes the song on a train where soldiers hear it and use it as they march in the fields, where a gypsy hears it and plays it on his violin back to his camp, where it finally carries over to the de Varese estate of Princess Jeanette, who sings it on her balcony. This song and its far-flung travels, now links Maurice and Jeanette even before they have met. The passing of the song from person to person was seamless and very cleverly done—sort of like what will later take place in Gigi.

The Princess it would seem is very unhappy and well, sexually frustrated. Just 22, she is the widow of a very old man. If she is to marry again she must find someone of equal royal rank, but this holds problems in itself, as there are only two eligible suitors: ages 85 and 12. What is an attractive widow to do?

While the Princess is busy being bored at the chateau, Maurice decides to take the Count’s 1 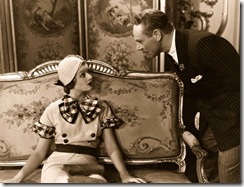 5 suits to the estate and collect payment. When he arrives at the chateau and gives his name, Maurice Courtelin, he is mistaken for a Baron Maurice Courtelin. He meets the princess and immediately falls in love with her. Not knowing he’s just a lowly tailor, the family and their guests are enamored with him and his singing of "Mimi"—so much so that they all begin singing it. The only two people who don’t quickly embrace his charms are the Princess and her would-be suitor the Count de Savignac (Charles Butterworth). One particular person who finds him irresistible is the Countess Valentine (Myrna Loy, in an outlandishly funny turn), who seems to be nymphomaniac. It was enjoyable to watch Loy as a man-hungry woman chasing after Maurice—especially when you consider Chevalier’s reputation as a ladies man. 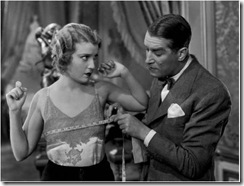 Somehow a rumor emerges that Maurice is not a baron but a full-blooded prince traveling incognito. This changes everything and sends hope to the Princess, who now allows herself to open up to the charming Maurice. What is a love-stricken tailor to do? It’s obvious that she can’t marry a commoner…let alone a a common tailor. Will he tell her the truth? In the end all is revealed, but love conquerors all.

All together there are nine fantastically staged musical numbers by Richard Rogers and Lorenz Hart. The songs are extremely catchy. If you have seen this film, you might just be humming “Mimi” or “Isn’t It Romantic” as you read this.

Both MacDonald and Chevalier are delightful singers and carry their songs off very well. Some of the lyrics are quite racy for 1932, but somehow most of them, along with the double-entendre laden dialogue, got past censors—though 15 minutes did get cut (one can only wonder how far Mamoulian actually tried to go). In addition, the supporting cast of Myrna Loy, Charles Ruggles, and C. Aubrey Smith are tremendous.

If you love musicals, you will love this movie. A thoroughly enjoyable classic.