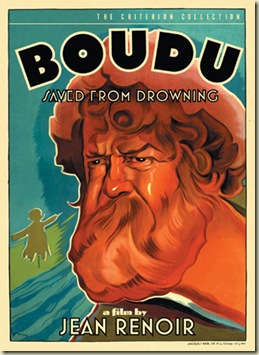 Are you someone who saw Down and Out in Beverly Hills back in 1986 (attired in some form of stone-washed denim or Lycra skirt) and thought it was hilarious? Yet, somehow, today if someone were to mention it you would say it was terrible and that contrary to what others might say, you never crimped your hair or made the mistake of thinking hair mousse was edible. Oh, the inescapable 80s.

Down and Out in Beverly Hills was a remake of this 1932 French black comedy directed by Jean Renoir and starring the irreverently funny Michel Simon as Boudu. Based on a play by René Fauchois, the story follows Boudu, a dirty, shaggy bum, who is saved from drowning himself in the Seine by bourgeois Parisian bookseller Edouard Lestingois (Charles Granval). The Lestingois family decides to adopt Boudu and make him a “respectable” member of society. They takes him into their home and he (and we) learn just how respectable middle-class Parisian society is!

It would seem that the respectable Edouard 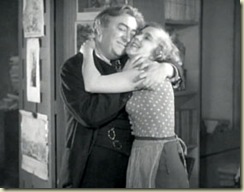 is a gentleman. He has a family, a business, and a maid (Séverine Lerczinska), who also happens to be his mistress. At first, his prim and proper wife (Marcelle Hainia) is disgusted by Boudu’s hygiene and poor table manners. Yet, over time she becomes strangely attracted to Boudu (after a haircut) and they have an affair. Meanwhile, Edouard can’t understand why Boudu isn’t more grateful to him for saving him and giving him a chance at respectability. Instead, what he finds is ingratitude from a man who just keeps asking him for more of everything: clothes, food, and money (as well as his wife). What’s comic about Edouard’s bewilderment is that Boudu has become just like him and, in a way, is unhappy. Another humorous turn happens when Boudu finds lottery tickets in one of the jackets Edouard gives him. When he shows them to Edouard the bookseller tells him to keep one for himself. This turns out to be a one-hundred thousand franc winner. With his newfound wealth Boudu is now respectable 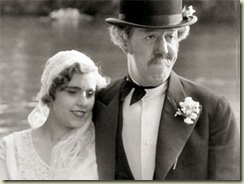 and marries the maid. Yet, at their wedding party something strange happens. While riding a skiff down the Seine, Boudu reaches down for a water lily and causes the skiff to overturn. While the wedding party swims to the banks, Boudu lets the current carry him away from them. He happily returns to his old, carefree life. In the end, he is saved from drowning in bourgeois respectability.

This film was not released in the United Stated until 1967, but when it got here it became an art house staple. What attracts most to this film is its biting criticism of middle class respectability. It was so scathing that it was banned in France only after a few days in release. Today it seems ridiculous that such a film could get banned, but evidently middle class Parisians couldn’t handle the truth of what they were really like.

Michel Simon is a comic genius as the 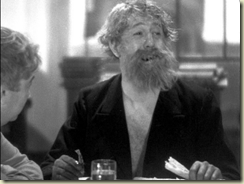 unkempt Boudu. My favorite scene is when instead of spitting on the floor because he was told it was rude, he spits in a copy of Balzac's Physiology of Marriage. You need only know that the sub-title was Petty Troubles of Married Life to get the joke. Throughout the film Simon displays his adeptness at physical comedy and his perfect comic timing.

One of the things I most remember about the film is how Renoir shot the scenes at the Lestingois’ home and business. Most of the shots are very tight and the set is over-cluttered, which gives these scenes a claustrophobic feel. No doubt, Renoir was making a statement with this approach. And when you contrast the interior scenes to the exterior ones, which are airy and full-framed, you see an entirely different world.

Biting and irreverent, this is a black comedy worth watching.