When men aspire to great things only to fail in the final campaign it can be disheartening. Napoleon had his Waterloo and Abel Gance had, well, his Napoleon.

This innovative 1927 silent was directed and written by legendary French filmmaker and actor Abel Gance. Originally planning to do a six-part film about the life of the greatest military tactician ever, Gance found himself facing his own Russian winter when he couldn’t raise the funding for his epic dream and instead only made one part of the film. Mind you, this one part was a long one at 6-plus hours. However, there is no complete version of this film. In 1979 film historian Kevin Brownlow performed a restoration of two-thirds of the existing film and a few years later Francis Ford Coppola released an edited 4-hour version of this restoration in the USA. In 2000, Brownlow released his latest restoration at 5½ hours in Europe—this version is unavailable in the USA because Coppola is evidently a pig.

If you’re looking for the Empire, Austerlitz, the Russian campaign, or, God forbid, Waterloo, this is not the film for you. Instead, this film traces Napoleon from his 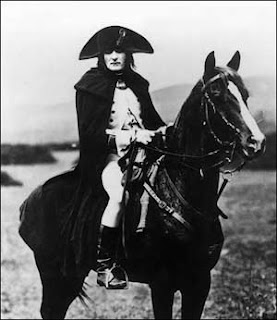 days in military school to his victorious 1797 invasion of Italy. I look at this film as a primer for those who want to know how a Corsican boy became the Emperor of France. Notable events that are covered in this film are the Reign of Terror and Napoleon’s flight from Corsica.

What makes this film most notable is the camerawork and the use of Polyvision (or triptych and later Cinerama). There are a number of scenes that employ the use of mobile camerawork, such as when Napoleon trades in his carriage for a faster horse. Gance used an overhead swinging camera to capture the chaotic National Convention, which was intercut with Napoleon rowing for his life in a raging sea, and the famous overhead shot of the guillotine. Of course the most famous sequence of the film uses Polyvision, which was a widescreen projection across three separate screens (hence the name triptych). Gance used this in the Italian campaign finale, while tinting the three screens blue, white, and red to match the French flag (see top picture).

The innovative techniques used in this film alone are enough to make it a classic. The story itself is good, but it does over-romanticize Napoleon. Albert Dieudonne makes a good Napoleon; an even better one than Charles Boyer’s in Conquest. It would have been interesting to see the entire epic that Gance planned, but one can take solace in watching later films he made about Napoleon.