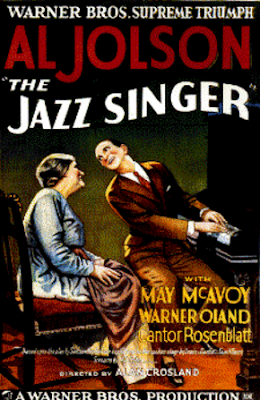 …What? Wrong movie you say? But all my chaverot say Babs is the world’s greatest entertainer! Excuse my mistake, but when I watched the Warner Brothers’ promo claiming that the star of this film was the world’s greatest entertainer I just assumed that the young Jewish man singing was Babs—I thought it was an earlier version of Yentl, but this time she’s pretending to be a Jewish boy who wants to become a black man. Oh, the embarrassment!

Let’s see if I can get so 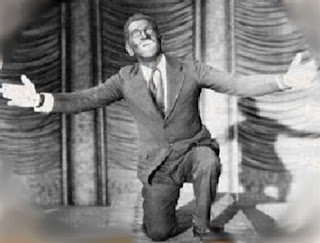 mething right…this film is considered the first feature-length sound film, but in all actuality only the songs and a few very brief scenes after the songs are in sound. After checking with TCM.com I have learned that Al Jolson (evidently the world’s greatest entertainer…my goodness Babs must feel like an imposter!) stars as a Jewish boy who wants to become a black man… What! Jumping Josaphat! Let’s start again…

Jakie (played by this Jolson person) is the son of a cantor who doesn’t want his son singing jazz in saloons, but Jakie is a singing fool and runs away to San Francisco. Not wanting to be found by children’s services he changes his name to Jack Robin and disguises himself as a black man…What? Jiminy Cricket! One more time…

Evidently this man performs in something called "Blackface" and is allowed to become a very famous and rich man by performing in minstrel and Broadway shows. While rehearsing a Broadway show Jack decides to visit his parents. After making the fateful decision to sing jazz in his father’s house, he and his father argue and Cantor Rabinowitz indignantly calls his son a "jazz singer"—I wonder what he would have called him if he’d seen him with his makeup? Anyway, later when the cantor is too sick to sing on Yom Kippur, Mrs. Rabinowitz goes to Jack and begs him to take his father’s place at Temple. At first Jack denies this request but then relents and goes to the temple and sings the Kol Nidre. After hearing his son perform his duty, Cantor Rabinowitz peacefully dies. The final scene of the film finds Jack singing (black-faced and white gloved) "Mammy" on Broadway to his adoring mother—who I have learned under further review was not played by Hattie McDaniel in white-face. Evidently this was not considered racially sensitive in 1927.

Why is this film considered a classic? It marshaled in a new film technique: the sound of the recorded human voice matched to images of the human form in a feature-length film—the talkie. It eventually sounded the death knell for the likes of John Gilbert and Lina Lamont. In addition, some of the songs featured in the film became staples of pop culture. Other than the sound element, I can’t think of anything that distinguishes the film. Al Jolson might have been a good singer, but his acting left something to be desired. I suppose the story is somewhat interesting, but I wouldn’t go so far as to describe it as compelling.

So, if you want to see where the talkies began, this is the place to start. Mind you, don’t make the same mistake as Philip Seymour Hoffman in The Savages: some people will not appreciate the artistic expression that Jolson displays.