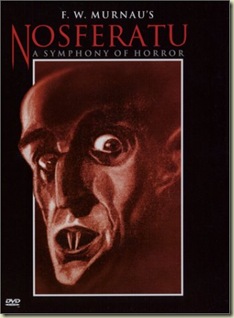 Suave, sophisticated, and outright sexy is what you think of Max Schreck's Nosferatu, right? Don't be ashamed to admit it... What? You don't like pasty skin, pointed ears, sickening-long and pointed nails, and the gait of a floating corpse? Aren't you a fan of German Expressionism?

This 1922 silent by F.W. Murnau is a classic retelling of the Dracula myth that has often been imitated, but never surpassed. For those not in the know, Murnau had some problems with Bram Stoker's people, so he changed the setting and the names of the characters from the original novel. Instead of Count Dracula wreaking havoc in London we have Count Orlock, played by Shreck, decimating Bremen, Germany. However, the core plot is the same as the book. I'm sure you know the crux of the story, so I'll move on to what is great about this picture. 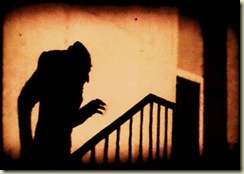 The interplay between shadow and light in some scenes is just fantastic. Photographers Gunther Krampf and Fritz Wagner do an amazing job of capturing just the right amount of light to capture the creepiness that is Orlock's shadow.

Max Schreck is unforgettable as Count Orlock. To allow yourself to become so embedded in the skin of your character takes talent. Hand movements, facial expressions, the tautness of his frame--all of these were perfectly orchestrated in such a way as to make Count Orlock a timeless movie monster. Those of you who have se 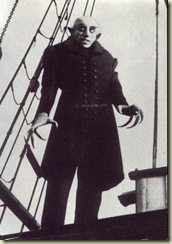 en Willem Dafoe's portrayal of Schreck in Shadow of the Vampire might have a deeper appreciation of Schreck's work.

My favorite scene is when Count Orlock arrives by boat in Bremen and eerily glides off the boat and through the darkened and deserted streets. This scene gave me nightmares when I first saw it as a child. Do you have a favorite scene?

This film is a classic and should be watched--even if you don't think Max Schreck is the Sexiest Man Alive
Posted by Kimberly J.M. Wilson at 5:40 PM