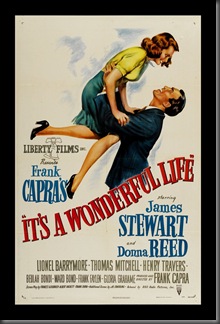 It is a myth that the suicide rate increases between Thanksgiving and Christmas.  However, the “most wonderful time of the year” is not always so wonderful for everyone.  Christmas cards, crowded stores, wrapping presents, and mounting debt can weigh heavily on the psyche. And, then there are those who have lost loved ones or feel as though they haven’t any loved ones at all.  For these people, the holiday season is a torturous time, full of regrets and sorrows.  What-ifs, should-haves, and if-onlys play cruel tricks on those who carry around ghosts and faded dreams in their troubled minds.  I suspect this is the reason that It’s a Wonderful Life (1946) has endured as a Christmas trad 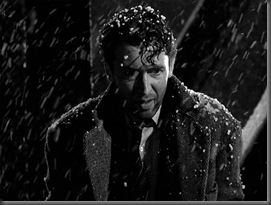 ition for more than fifty years. Everyone—yes, everyone—has a little of George Bailey running around in their subconscious.  As a wise person once told me, circumstance touches everyone—no one is immune.

I enjoy watching It’s a Wonderful Life every Christmas season because I can relate to George Bailey (James Stewart). An adventurer at heart but a duty-bound person in reality, George and I both made life-altering decisions based on the cards circumstance dealt us—even if that deck was full of jokers we played the game by the rule of responsibility; I expect many others can say the same.

For those unfamiliar with George’s story, it is a simple one. From a very young age George exceeded expectation: he saved his brother (Todd Karns) from drowning and prevented his drunken pharmacist boss (H.B. Warner) from accidentally poisoning someone. When his father (Samuel S. Hinds) died of a stroke he forwent a trip to Europe and then college to head the family’s struggling building and loan company. Instead of spending $2,000 on his 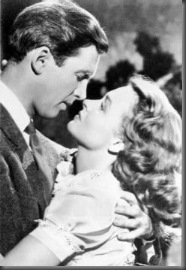 honeymoon he used it to stave off a run on the bank.  He invested in a town, Bedford Falls, and a group of people that at heart he wanted nothing more to do than to escape.  Along the way he married a girl (Donna Reed) he knew worshipped him, and agreed to live in a ramshackle house filled with children that required he continue in a job he hated in a town too small for his ambition. And then a bit of ironic circumstance slapped poor George in the face: his undoing was to come at the hands of his own obedience to duty and responsibility.  This, no doubt, was the last bitter pill that George could allow himself to swallow, and so he took it believing that at least he did what was best for others.  Ah, but what would have life been like for all those who benefitted from George’s benevolence and self-sacrifice if he had never existed?  It takes an angel (Henry Travers) seeking his wings to show George that what he viewed as a failed existence was of significant importance to so many others.

In the end, It’s a Wonderful Life, is a redemption tale. Upon release some critics found the movie too sentimental and said that it idealized an unrealistic world.  By this time just about any film from director Frank Capra was labeled as overly- 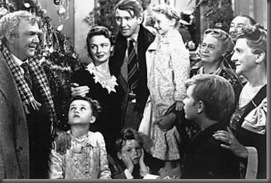 sentimental by many critics (perhaps you are familiar with the term “Capra-corn”?), and so many overlooked the universal theme of circumstance—it touches everyone.  And, so this corny film that lost $525,000 in 1946, now draws millions of viewers every Christmas. I’ve heard many people say that they watch it to remind themselves that perhaps they didn’t live the life they wanted, but at least they lived the life they got.  They, like George Bailey (and myself), endure the circumstances of life. Perhaps you are not a religious person—you are the perfect candidate for this film which Capra made to combat atheism—but there is one particular Bible verse that applies to this movie. It is written in James 5:11 that “we count them happy which endure”.  Happily, the spirit of It’s a Wonderful Life continues to endure today.