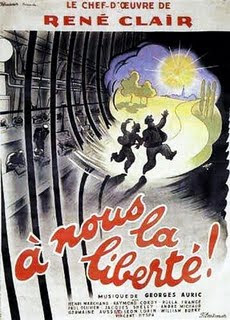 Ah, if only the assembly lines of America had not dwindled (or moved to Mexico & China), perhaps there would be less "freedom" for us…or at least 11% of us.

This 1931 French comedy, directed by Rene Clair, is a clever little picture that serves as a witty indictment of modern society’s drive toward mechanization. If you’ve seen both this and Chaplin’s Modern Times, then you no doubt noticed their similarities. This might be why the French studio that produced this film sued Chaplin for plagiarism—Chaplin evidently believed in collectivism as early as 1936.

At the beginning of the film we find Louis (Raymond Cody) and Emile (the great Henri Marchand) working on a prison assembly line, singing "Freedom Is for the Happy" and misappropriating a tool to use to saw off their cell window. When they make their break for the prison wall only Louis escapes. If you’re familiar with the Tour de France, you will find it comical that Louis makes it to freedom by incidentally knocking a rider from his bicycle and then later riding it across a finishing line where he wins first prize. Louis soon finds himself conning a store owner into believing that a thief robbed the store while the owner was in the back looking for something. In reality it was Louis and this leads us into watching Louis’ rise from lowly clerk to successful factory owner.

While Louis is becoming a success, Emile is released from prison and somehow ends up sleeping behind the factory and listening to flowers singing quaint songs—no these flowers weren’t poppies. Anyway, he ends up getting arrested and finds hi 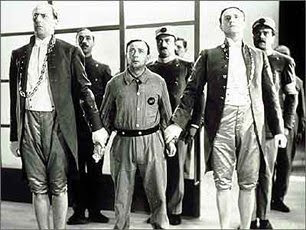 mself looking out his cell window at more singing flowers. Actually it’s a beautiful Frenchwoman, Jeanne, doing the singing. I’m not quite sure why, maybe he thought he was losing it with the singing flowers, but Emile tries to hang himself. This causes the gate to come lose and allows Emile to escape and come face to face with Jeanne and her shin-kicking uncle. From here Emile lands in the training department of the factory and leads us into the funniest part of the film. He listens to singing instructions on how to become a factory worker and then starts working as an assembler of phonographs. He becomes distracted when he sees Jeanne and the assembly line starts to comically fall behind. Eventually guards chase Emile to the Louis’ office door where the two old friends meet. At first Louis doesn’t recognize Louis, then he thinks he’s there to blackmail him. They have an entertaining scuffle, but eventually Louis realizes Emile isn’t out to get him and they joyously reunite by singing "Freedom Is for the Happy".

Soon Louis is introducing Emile to his cheating wife and her lover, as well as guests at a dinner party. They have a splendid time drinking wine and singing their favorite song as they make fun of Louis’ guests and lifestyle. This causes Louis’ wife to leave, which makes Louis even happier. Later, when Emile tells Louis he’s taken with Jeanne, Louis invites her and her uncle to a meeting where he makes a proposal (with money) to Jeanne. Jeanne obviously doesn’t like this idea—she already has a boyfriend. Eventually Emile figures this out and is heartbroken. While licking his wounds outside her window, Emile finds himself being pursued by the police and then guards into the factory.

Back at Louis’ house, Louis comes home to find a roomful of ex-cons who want to blackmail him. He refuses to pay. He takes the group on a tour of the factory and locks them in a secret room. Just as Louis is cleaning out his safe, Emile scurries into his office. He hides Emile and then tries to get rid of the guards. While he’s doing this another ex-convict comes in and takes the suitcase full of money. Both Louis and Emile then go on a wild chase, where Emile accidentally releases the ex-cons from the secret room. What follows is a side-splitting chase scene, with Louis in pursuit of the money, and the ex-cons and Emile chasing after Louis. Eventually all of them end up on the roof, where the police arrest all the ex-cons, not believing their story about Louis being a wanted man. Strangely enough, the suitcase is left on the roof.

The next day Louis opens his new factory to great fanfare. Unfortunately the police do some checking up and learn that Louis is an escaped convict. When they show up Louis realizes the jig is up and gives a speech where he gives the factory to the workers. Soon after this a strong wind starts to blow and the money from the suitcase (still on the roof!!) begins to trickle down on the festivities. At first no one wants to pick any up, but when Louis realizes where the money is coming from he starts going after it, which causes all hell to break lose.

The ending of the film is both message-driven and ironic. The factory is completely automated and the workers enjoy themselves with leisure activities. I’m not sure if Rene Clair was trying to say that automation was good because it did all the work, or that because they owned the factory the workers reaped all the benefits and could lead a care-free life The ironic part is that while all this is going on Emile and Louis are roadside tramps, singing "Freedom Is for the Happy" for coins. In the closing shot Louis sees a rich car go by and he reminisces about his lost wealth. Emile kicks him in the butt, breaking his idyll, and they continue down the road singing their song.

There isn’t much dialogue in this picture, instead Clair relies on music and singing to move the story along. Since this was a transitional film in France, from silent to talkie, I think this was an adroit decision by Clair. While the storyline is far from believable, it is quick-witted and enjoyable to watch—sort of like a Moliere play. That said, the best thing about this film is Henri Marchand. His facial expressions and comic timing, especially in the assembly line scenes, are something to be marveled. I don’t know that the film would be as good as it is without him.

If you like Jacques Tati’s films featuring Mr. Hulot, then I think you will like this. If you don’t like Tati’s films (there are some I hate, too), don’t be scared off—this picture just has common thematic elements with his. In addition, if you’re a fan of Modern Times you might want to compare it to this and see if Chaplin really did rip off the French. I wouldn’t classify this as a must see, but it is a good film.