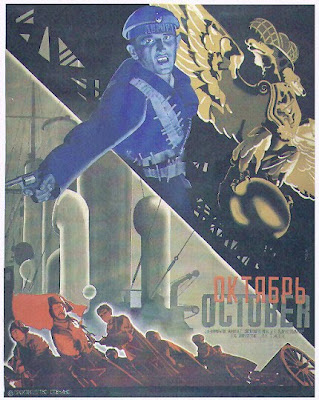 Lots of scary things happen in October. Forget about ghosts, goblins, and effigies of dead Michael Jacksons and Farrah Fawcetts, if you want frightening look no further than totalitarian revolutions.

This 1927 silent directed by Sergei Eisenstein recreates the Bolshevik victory of 1917—a tenth anniversary celebration. The film is hailed as a classic, but it is very difficult to follow and it is overtly propagandistic. That said, the film itself can be visually stunning at times (but this is nothing new for Eisenstein) and for the few revolutionary Marxists (Michael Moore comes to mind) running around in the world, it prolongs hope that the proletariat may one day overcome the chains of capita 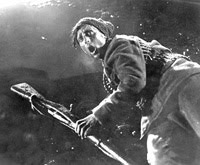 lism…but I wouldn’t hold my breath if I were you.

If you are not familiar with the Russian Revolution here is what you need to know: after the people deposed Tsar Nicholas two groups fought for power: the Bolsheviks and the Mensheviks. The Mensheviks, under Kerensky, decided to keep Russia engaged in WWI. This did not go over well at home where people were starving or at the front where the war effort was ill-supplied and in tatters. In one of the more effective scenes of the film Eisenstein depicts Lenin’s return from exile. He is greeted by a huge crowd and delivers his famous speech from the front of the train. Later, as the country falls even lower into despair, soldiers desert and join agitated citizens as they protest the direction of the Menshevik government. Yet another one of Eisenstein’s brilliant montage sequences takes place when he depicts the gunning down of marchers and the raising of a drawbridge with people and animals on it. You may remember this scene as the one where the horse and woman slowly slip from the drawbridge into the river. Other memorable shots are the comparison shots between Jesus, Buddha, Shiva, etc., which Eisenstein used to make the Soviet atheistic point that all religions are alike. Eisenstein also uses a compelling comparison shot when the Kerensky government is about to be toppled by the Bolsheviks. It pains me to write this, but he compares Kerensky’s getaway, in a car decorated with an American flag, to that of a retreating Napoleon (damn those Russian winters!). In the end, the Mensheviks, who were just one step above the Tsarists, are defeated by the proletarian militias and Lenin and the Bolsheviks assume power.

The film is considered a silent becomes there is no speaking, but there are sound effects like gunfire, marching, roaring crowds, etc. The actual production itself was monumental with massive sets, location shooting, and a cast of thousands. However, after encountering great success with The Battleship Potemkin, Eisenstein found himself the object of massive criticism both in and outside the U.S.S.R. following the release of this picture.

Certainly this is not the greatest film he made, but it does have some merit. The visuals alone are enough to make it a classic cinematic effort, but critics are also correct when they say the film could stand some more editing.