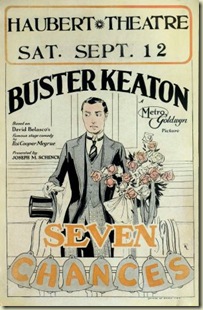 Whoever said 7 was a lucky number never met Jimmie Shannon—the hero of this film who must be married by 7 p.m. on his 27th birthday if he is to inherit $7 million. Doesn’t sound so unlucky to you, huh? What if I told you he learns this news on his 27th birthday with only a few hours to spare?

Buster Keaton stars in this 1925 silent classic race to the altar, where surprisingly women actually turn down marriage proposals that offer $7 million dowries. He offers this bonus bonanza to his true love first, but she’s miffed that he seems only ready to get married now that he must marry any girl to get his inheritance. Then he asks seven country club types and they all turn him down---perhaps if it 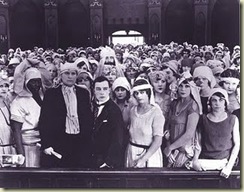 had been Oct. 1929 they would have said yes. Anyway, an ad is taken out relating his predicament to the general female population and Jimmie goes to the church to wait for any takers. Asleep in the front pew, Jimmie soon awakes to a church filled with eager brides. What ensues is a madcap chase of angry would-be brides pursuing their ticket to fur coats and butlers named Ruggles. In the end, the sweetheart forgives and the couple is married at exactly 7 o’clock—all in a day’s work.

This is not Keaton’s best film, but it is funny and has a few good stunt scenes. Most notable of these scenes is the falling rock sequence where not only does Keaton have crazed women chasing him but deadly rocks as well. Less than an hour long, the film, with its comical elements and action sequences, is a good way to introduce a silent film virgin to the genre.