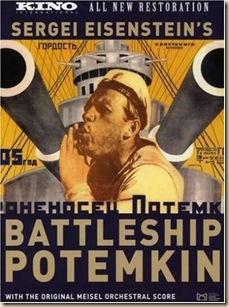 If you ever had to take a film class in college you watched this 1926 Soviet propaganda film by Sergei Eisenstein. You may have hated all 75 minutes of it, but you watched it and then wrote the review you thought your Eisenstein-worshiping professor wanted to read. Am I wrong? Perhaps. I do know a lot of people who think it’s great and I do think it was very important to the development of film, but it is not my favorite film.

There are three things this film is known for: the use of montage, violent images, and the famous baby carriage careening down the steps of Odessa. I’d say there was a fourth, that Joseph Goebbels thought the film was brilliant and took copious notes to use later in his duties as Nazi propaganda minister, but I know Eisenstein would like that to be kept on the down low—especially since in the film an angry mob attacks a bourgeois when he yells (via title card) “Down with the Jews.” I think Goebbels must have just remembered the title card!

The Bolshevik Revolution took place in 1917 (just 8 years prior to the release of this film), but it wasn’t the first attempt to throw of the chains of Czarism. In fact, the Russians had a revolution in 1905; the 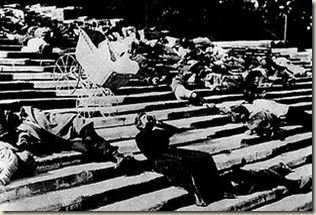 same year that this story takes place. This is not a coincidence because sailors of the Battleship Potemkin did have a mutiny and there were political protests in 1905. However, don’t think this is a historically accurate film, because there never was a massacre on the Odessa steps.

The film itself is broken into 5 segments: 1. Sailors protest eating maggoty meat (and who wouldn’t!), 2. Sailors mutiny and their leader, Vakulynchuk, is killed, 3. The mourning of Vakulynchuk by Odessa, 4. The massacre on the Odessa staircase, and 5.Soldiers and sailors unite against tyranny. The most famous of these is the Odessa staircase sequence. This is where a mother pushing a baby carriage falls to her death and as she falls she nudges the baby carriage, causing it to roll down the steps amid chaos. Another famous scene is when the woman is shot in the eye (through her glasses). These scenes have been imitated in such films (but many more) as The Untouchables, Bonnie and Clyde, Foreign Correspondent, and most recently in Inglorious Bastards.

Eisenstein was a master of evoking emotion through montage. He was a master manipulator in this regard. His creation of images that stay with you long after seeing the film is striking. This is an important piece of film history, but not a film that just anyone will enjoy—including some former students who took History of the Motion Picture 101—you know who you are—kiss-ups.