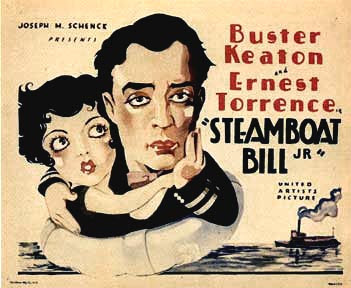 Please do not watch this film if you've ever been on a cruise ship attacked by Somali pirates--the sight of the Stonewall Jackson might trigger your PTSD.

Buster Keaton plays Willie Canfield, the son of Steamboat Bill, captain of the dilapidated Stonewall Jackson. Bill is facing hard times as his rival, J.J. King, is driving him out of business with his newer (and no doubt safer) steamboat. When Bill gets a telegram from his son, whom he hasn’t seen in years, he hopes that his returning son will be able to help him fight off King. What he gets is a refugee from a Parisian café—b 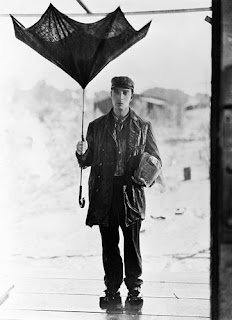 erets, pencil mustaches, and ukuleles were evidently the vogue at Harvard in the 1920s. Quickly taken to the local barbershop, Willie meets an old friend from Boston—Mr. King’s daughter. Surprised? If this sounds familiar to you think Our Hospitality, an earlier Keaton film.

The fathers may not like one another but the children do. This creates a problem, as neither father wants their child involved with the other. So in order to see one another they have to arrange a secret rendezvous. What ensues is standard Keaton, as he tries unsuccessfully to see his beloved on her father’s boat.

After buying his son a train ticket back to Boston, Bill gets into a fight with King over his boat being condemned. This lands Bill in jail and keeps Willie from going back to Boston. As a means of breaking his pop out of jail Willie bakes a loaf of bread big enough to both feed King Kong and hide several tools—which are discovered by the sheriff, who then attempts to lock Willie up too. A surprising punch to the gut later and Willie breaks the old man out. Too bad Willie’s an idiot and gets his clothes caught in the cell door. He’s promptly knocked on the head and sent to the hospital.

While Willie’s in hospital, a cyclone hits River Junction. This provides the most impressive sequences of the film. The high winds produced for these scenes most have been significant. Building facades are torn down and cars are moved by the wind. Of course the most famous scenes are where the buildings fall down on or around Keaton and he is narrowly saved by a door or window cutout. In other scenes there are pre-Matrix images of Keaton suspended in motion due to the force of the wind. In addition, he rides a flying tree from ground to river. In the end, he used the Stonewall Jackson to save his father, his girl, and her father from drowning—and for good measure he fishes out a minister to marry them.

This was Keaton’s last "great" film. It is not my favorite Keaton film, but the cyclone scenes are worthy of being admired. My main issue with the film is I think Keaton could have done a bit more in the first half of the picture. Nonetheless, this is an entertaining film to watch.