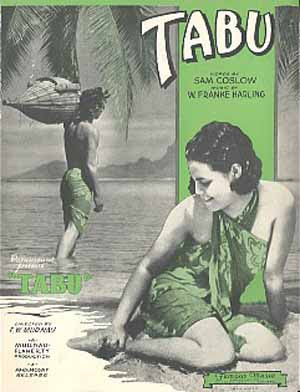 What’s more tabu: wearing a white thong in public after Labor Day or not mourning Michael Jackson because you know he was a sick SOB?

F.W. Murnau directed this 1931 silent classic filmed completely in the South Seas with a cast of natives (or whatever PC term you want to insert). It is part documentary and part fictional romance. At the start of production the film was supposed to be a collaboration between Murnau and the acclaimed documentarian Robert Flaherty (Nanook of the North), but things went sour when Murnau started to take the film in a fictional direction. It took two years to complete and sadly, Murnau died in a car accident prior to the release.
The story follows the tragic love story of a very gorgeous island girl and her EXTREMELY hot pearl fisherman lover. When the tribe’s sacred maiden dies the holy man chooses our heroine to take her place and be consecrated to their gods. She becomes tabu and cannot marry her love. T 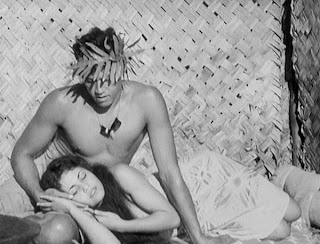 he couple attempt to run (or more accurately row) away in a canoe and travel for what seems like forever. They land on a French colonial island and the man takes a job diving for pearls. Mind you, these two have never had to pay for anything in their lives, as there was no such thing as money on their old island. Accordingly, the man happily signs an IOU for cases of champagne, which comes back to haunt them. Meanwhile, the girl is plagued by dreams of the holy man telling her to return or he will kill her lover. She wants to flee the island, but they can’t buy tickets off the island because of the IOU. In order to make enough money, the man decides to dive for pearls in a tabu area known for its man-eating sharks. Ironically he is victorious in this pursuit only to find when he returns home that the holy man has taken the girl away. He attempts to swim after them but cannot catch them and so he decides to drown himself in the ocean.

For not being professional actors, the two lovers did a great job. They seem very natural and both deliver subtle performances. Plus, they are both drop dead gorgeous.

The actual cinematography and scenery are beautiful. It may be difficult to believe that a black and white picture could do justice to an island picture, but it does. Murnau employs his love of shadows in the darker parts of the film to emphasize mood.

The story itself is compelling. You find yourself rooting for the couple and commiserating in their misery. The fact that this is a story about the “other” makes it even more entertaining. It was nice to watch a film about another culture from this period of filmmaking where the actual culture is portrayed by correctly casted performers.

Murnau went out on a limb here and I think he did a wonderful job. I suppose if you had to die tragically in a car accident that this isn’t a bad last picture to make.