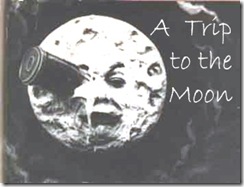 I first saw this Georges Melies 1902 silent in a film history class. My professor was really into the evolutionary nature of film and kept pointing out that this is considered the first science fiction film. The film stretched a lot of limits, starting with its runtime at 14 minutes--most films at this time were under five minutes. The mis en scene, costumes, and special effects were pretty advanced for 1902. Nearly 70 years prior to the real moon landing, Professor Barbenfouillis and others take a trip to the moon. They get taken to the leader by some odd-looking Selenites and discover that umbrellas have the power to do more than keep people dry--poufs of smoke for the Selenites. Once they escape the moon they get to do a cursory expedition of the sea. They did more in 14 minutes than some current blockbusters do in 2 hours of complete tripe. 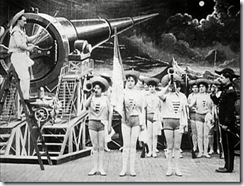 Anyway, if I've learned anything from French film history, it's that they are owed a debt of gratitude for their early contributions to film development (and of course later with Renoir, Godard, Truffaut, etc.). I do believe this film is one that should be considered a must see for a true film lover.