The Great Train Robbery (1903) was an Edison production that got the western genre off and running. I'm not a big fan of westerns, but I realize that in the early days of film it was most probably the most popular genre.

Again, I first saw this film in a film history course and found myself struck by the film's use of narrative. For a 12 min. film they packed in a good amount of story development and scene transitions. Indoor, outdoor, action, stationary...all the types of different shots used in this film. The film also uses tinting in a few shots--my favorite being 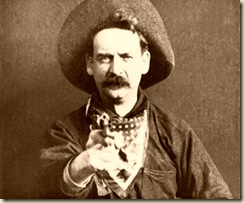 the tinted dust being kicked up by a dancing cowboy. D.W. Griffith was no doubt influenced by this very technique. The closing shot (and at the time of the film sometimes the opening shot) of a man aiming a pistol point blank at the audience is one of the most iconic shots in film.

For its contributions to the development of the western and its use of tint, I do believe this film is one that true film lovers should see.