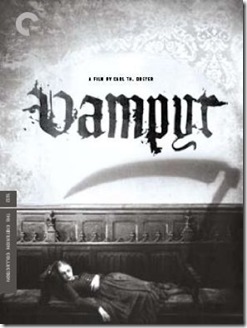 If only the scythe had come before I watched this!

Some critics regard this 1932 gothic horror film Danish director Carl Theodor Dreyer’s greatest work and one of the greatest horror films of all time. I don’t know if I’m actually an expert, but I have to strongly disagree. I think his The Passion of Joan of Arc is truly a good film, but I hated Vampyr. The way Dryer incorporates imagery is interesting, but the story was just too all over the place for me.

Based on the Sheridan Le Fanu short story”Carmilla,” the film follows traveler David Gray (Julian West) to a a provincial village outside Pairs, where a series of supernatural murders are taking place. Thinking the villagers ignorant and superstitious, David soon learns what happens in this village is no joking matter. 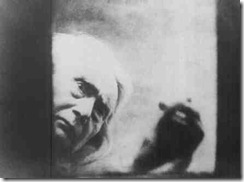 A series of strange (and at times unexplainable) incidents befall David. Whilst sleeping at an inn, David is awakened by a man (whom he doesn’t know) who places a packet in his room that reads: To Be Opened upon My Death. Later, David follows shadows to an old castle where other shadows are dancing. This is where he sees a doctor (Jan Hieronimko) and an old and not so attractive woman (Henriette Gerard), who we will later learn is Marguerite Chopin, but more importantly, both are vampyrs. As he walks to a nearby manor David sees the man who left the package in his room. Suddenly, the man is shot dead and David is ushered into the manor by servants. He is invited to stay the night and he meets Gisele (Rena Mandel) and her seriously ill sister, Leone (Sybille Schmitz).

After finding Leone lying unconscious outside the house with bite wounds, David remembers the mystery package. When he opens it he finds a book about vampyrs. As he reads it he realizes Leone

has been the victim of one of these demonic creatures. When it is determined by the doctor that Leone must have a blood transfusion to survive, David offers his. This drains David of all his energy and he settles down to restless sleep. He awakens suddenly, sensing danger, and goes to Leone’s room to find the doctor about to poison her and Gisele missing. David pursues him to the castle, where he has a vision of being buried alive. After this unpleasant vision ends, David rescues Gisele, but the doctor gets away.

When a servant reads in the vampyr book that the only way to kill a vampyr is to put an iron bar through its chest, he and David go to Marguerite Chopin's grave. When they open her grave they find her creepily laying there and they kill her with an iron bar. They then track the doctor to a mill and somehow suffocate him to death with flour—I guess this kills vampyrs, too? The vampyr curse is lifted and Leone is saved. And, in one of the most bizarre endings I can think of, David and Gisele somehow end up in a boat on a fog-laden river and then find themselves coming into a bright clearing. Was it all just a dream? Your guess is as good as mine.

There are no explanations to what transpires in this movie; things just happen. The imagery of the menacing scythes, eerie fog, and silhouette shadows are ca 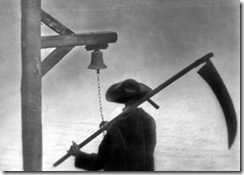 ptivating, but that’s the only thing I found appealing. Dreyer definitely creates a very austere and sterile setting: it looks and sounds like a gothic horror movie. Yet, I was just too confounded by the strange narrative that Dreyer chose to follow. My rule about film is this: if after watching a film you ask yourself at the end, “What the hell was that?”, then it wasn’t good.

Some like, and even love, it—I did not. I most assuredly could have died without having seen it.