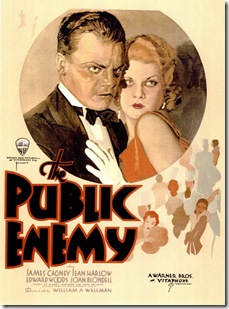 What an apt title for the film that eventually brought us the Hays Production Code. Too bad Chuck D, Flav, and Terminator X weren’t around to help directors “Fight the Power” in the 30s…then again, I can’t imagine them having much say in an atmosphere where overt racism could still pass censors. Oh, the ironies of Hollywood!

William Wellman directed this penultimate gangster film starring James Cagney as amoral thug Tom Powers. Based on the John Bright and Kubec Glasman novel, Beer and Blood, the film was a huge success for Warner Brothers and made James Cagney a star (it also typecast him for several years). The film bears many similarities with the lives of real-life Chicago gangsters Hymie Weiss, Nails Morton and Deanie O'Banion—though Warner was careful to say the names and characters of the film were purely fictional. It is perhaps the most important gangster film ever made, as it went on to influence countless directors in the gangster-film genre, most notably Francis Ford Coppola.

The story begins in 1909 South Side Chicago and introduces us to the life of Tom Powers (James Cagney). The son of an abusive policeman (Purnell Pratt), Tom is a juvenile delinquent and petty thief, along with his pal Matt Doyle (Edward Woods). Both boys admire a local criminal, Putty-Nose (Murray Kinnell), who hangs out at the Red Oaks Club. As the boys grow older Putty-Nose introduces them to more advanced crimes and gets them involved in an armed robbery at the Northwestern Fur Trading 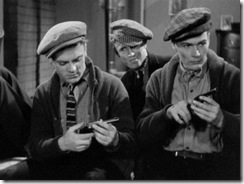 Company. When a nervous Tom shoots a stuffed bear’s head, he alerts a policeman to the scene and the cop kills a thief by the getaway car. Tom retaliates and shoots the cop, but not before Putty-Nose deserts them. This is where Cagney calls him a “dirty, no-good, yellow-bellied stool!" and vows to take revenge.

A few years later Tom and Matt, now truck drivers, team up with saloon owner Paddy Ryan (Robert Emmett O'Connor) and when Prohibition hits in 1920 they become bootleggers. In one memorable scene they use their gasoline delivery truck to drain impounded beer from a government warehouse. This heist gives them a taste of what big money can buy: flashy clothes, fast cars, and even faster women, like Mamie (Joan Blondell) and Kitty (Mae Clarke). They eventually hook-up with local crime boss Nails Nathan (Leslie Fenton) and start making booze and selling it (forcefully, if necessary) to speakeasies. 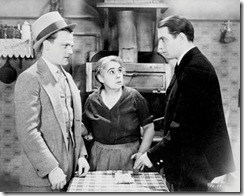 a wounded WWI vet, returns home to find Tom hasn’t done such a good job of staying out of trouble and has been lying to their Ma (Beryl Mercer) about where he gets his money. At his welcome home dinner, with a huge keg of beer donated by Tom, Mike calls his younger brother out in front of Ma, calling him a murderer. This causes Tom to leave home for good.

The next morning we find Tom in a very bad mood. This sets up one 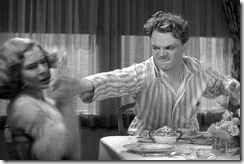 of the most memorable scenes in film history. When girlfriend Kitty talks back to him at breakfast he shoves a grapefruit into her face. Apparently, this was his way of saying their relationship was over. He soon finds a new one in Gwen Allen (Jean Harlow). He takes her to Matt and Mamie’s wedding reception, where he spots the double-crossing Putty-Nose. Later, he and Matt follow him and after making Putty plead for his life on hands and knees, Tom cold-bloodedly shoots him point blank.

Though he avoids his brother like the Plague, Tom tries to give his Ma money, but she refuses. When Mike returns home, he tells Tom they don’t need his “blood money” and punches him in the face. Though it is safe to assume that Tom is a sociopath, I find it interesting that when his brother hits him he doesn’t retaliate. I do, however, always find it entertaining to watch him rip the money in half and throw it in his brother’s face—I think this sends more of a message.

You add this complicated familial relationship with the strange one he has with Gwen, and you can see why he becomes u 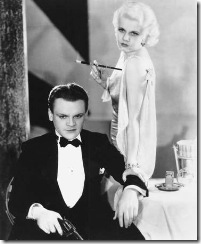 nhinged. To say that Jean Harlow’s Gwen is the epitome of a Flapper doesn’t go far enough. Her aloofness combined with her overt sexuality is enough to drive any man crazy, and Tom didn’t need any help. For his own sanity, he decides to leave her forever when he learns that Nails has been killed in a riding accident. In a scene that reminds me of both The Godfather and The Sopranos, Tom buys the horse that killed Nails and then kills it.

Nails’ death leads to a gang war with their rival Schemer (appropriate name if I ever heard one), and Paddy’s bar is bombed and the brewery burned down. The gang goes into hiding with an old whore named Jane (Mia Marvin). When Tom gets drunk she seduces him and then taunts him with this fact the next morning. Repulsed, Tom, with Matt in tow, leaves the safety of the apartment 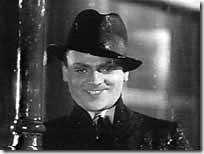 , not knowing that Schemer’s gang has machineguns outside. Matt is killed and Tom swears vengeance. After stealing two 38s from a pawnshop, Tom walks through the rain to Schemer’s hideout and in a bone-chilling scene, kills the entire gang, while incurring several deadly wounds himself. He stumbles from the building and lands appropriately in a rain-soaked gutter.

After being found he is taken to the hospital, where he has the chance to tell Mike and Ma that he’s sorry and he’s going straight. Later, Tom is kidnapped from the hospital by rivals. In a sick twist of irony, someone calls his relieved Ma and tells her he’s on his way home. When the doorbell rings, Mike answers it to find a bullet-ridden and gift-wrapped Tom dead at the door. What a way to end a film!

In 1931, with Prohibition still lingering and the Depression marching on, this film forced audiences to examine why boys like Tom and Matt turned to crime. Yes, it is a gangster film, but it is also a social conscience one as well. What are the roots of crime? No one is born a criminal. The famous last line of the film: “The Public Enemy is, not a man, nor is it a character--it is a problem that sooner or later WE, the public, must solve,” is telling. Of course, it’s 2010 and this problem still hasn’t been solved, but through films like this and more recent ones like Precious, the viewer sees a world in which that may not be familiar and learns something.

James Cagney was electrifying in this performance. It’s easy to see why he was typecast for so long after this film, because he plays a sadistic sociopath very well. I also think Jean Harlow and Mae Clarke do nice jobs in their roles as his girlfriends. While Harlow is more remembered that Clarke in this film, I think her reactions in the grapefruit scene are priceless.

As for the story itself, it is compelling on many levels. It’s difficult for viewers today to believe that people behaved like this in the 1920s, but most of what happened in this film can be tied back to real-life occurrences. It’s sort of a time capsule to the age of Prohibition and speakeasies. Of course, I have a hard time figuring out why this film was so shocking to would-be censors, as most of the violence takes place off-screen. Perhaps the realism of the film made them uneasy. Who knows.

In any case, this a good film. It is one of Cagney’s best performances and it is historically relevant. In addition, it had a significant impact on the development of the gangster film genre.

Email ThisBlogThis!Share to TwitterShare to FacebookShare to Pinterest
Labels: **, 1931, Wellman (William A.)