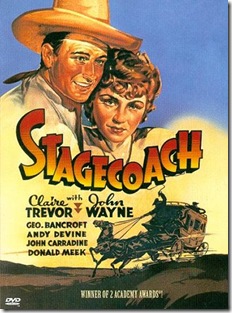 It’s difficult to believe that John Wayne wasn’t always a star, but before Stagecoach he and the genre that made him famous, the western, weren’t doing well. He’d had an earlier chance with The Big Trail (1930), but when that was a flop he was primarily relegated to making B westerns. The western itself wasn’t a hot commodity, so when director John Ford pitched the idea for his first sound western to David O. Selznick, the profit-driven producer took a pass. Big mistake. Instead, Ford and Walter Wanger produced one of the most important westerns ever made: Stagecoach, a film that delivered the money at the box office, reestablished the western genre, and made John Wayne a star.

Set in what would become Ford’s staple western setting, Monument Valley, this film was nominated for seven Academy Awards and won two Oscars for Best Supporting Actor (Thomas Mitchell) and Best Score. Since most film critics cite Stagecoach as the western’s savior, it is interesting that, in essence, this is a story about redemption. Screenwriter Dudley Nichols based his script about a group of people traveling on a stagecoach during an Apache uprising on both the Ernest Haycox short story "The Stage to Lordsburg" and Guy de Maupassant’s Boule de Suif. Brimming with colorful characters from various backgrounds, this is a story about overcoming social prejudices and working together to survive a common enemy, in this case a group of angry Apaches.

When the film opens we learn that the Apaches are on the warpath near the Arizona/Mexico border. As the army tries to telegraph nearby Lordsburg the line is cut. It is in Tonto, Arizona where we meet our stage riders: Buck (Andy Devine), the stage driver; Marshal Curley Wilcox (George Bancroft); Lucy Mallory (Louise Platt), a pregnant woman on her way to meet her Cavalry officer husband; Hatfield (John Carradine), a southern gambler; Henry Gatewood (Benton Churchill), the town’s embezzling banker; Dallas (top-billed Claire Trevor), a prostitute forced out of town; Doc Boone (Thomas Mitchell in an Oscar winning performance), a penniless drunk who is also forced out of town; and, Sam Peacock (Donald Meek), a whiskey salesman. Before heading out the stagecoach is warned by their cavalry escort Lieutenant Blanchard (Tim Holt) that there could be some trouble with Geronimo on the trail. Surprisingly no one decides to get off. Along the trail the stage 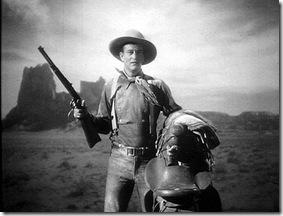 encounters Ringo Kid (John Wayne), a young man who has busted out of jail to avenge the deaths of his father and brother from the Plummer clan. The introduction of Wayne’s Ringo is one of the most iconic images of his career: a rapid tracking shot, which zooms in for a close-up of the face that would become the symbol of the western. Ringo, however, is the symbol of a fugitive and is promptly placed under arrest by Marshal Curley.

When they arrive at the Dry Fork station, Lucy learns that her husband has been ordered to Apache Wells and the stage is told by Lieutenant Blanchard that he can’t escort them any farther. When Buck suggests they stay at Dry Fork, Gatewood, who unbeknownst to the others is on the run with the bank’s money, insists that they continue toward Lordsburg. Curly takes a vote and the ayes have it, so the trip will continue. Meanwhile, at the way station, 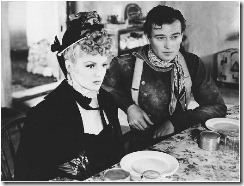 the passengers become more acquainted with one another over dinner. Not knowing that Dallas is a prostitute, Ringo treats her with respect and sits her next to the pregnant Lucy, who is highly offended and is relieved when Hatfield suggests she move closer to the window to escape the heat. Ringo thinks it’s him they are offended by and tries to leave the table, but Dallas begs him to stay right where he’s at.

With their repast over, the stage heads off toward Apache Wells. When Buck decides to take the mountain road in an attempt to avoid the Apaches, the passengers encounter a dropping temperature and mounting tensions. In an effort to help the uncomfortable Lucy, Dallas offers to let her sleep on her shoulder but is rebuffed by the proper Southern lady. After enduring an expertly filmed dust storm, the stage arrives at Apache Wells. They are greeted by four Mexicans who inform them that the cavalry has already left and that Lucy’s husband has been injured badly in a fight with the Apaches. This causes her to go into labor. Too bad Doc Boone is high as a kite after sampling most of Mr. Peacock’s whiskey on the ride. After ingesting as much coffee as possible, Doc is aided by Dallas in delivering Lucy’s daughter. This is one of the film’s more ironic turns, as the woman who wasn’t good enough to sit next to helps 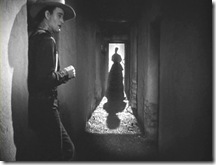 deliver the baby of the woman who shunned her. It also provides us with the image of a maternal Dallas and an admiring Ringo, as she nestles the baby in her arms for inspection. This also sets up the classic image of Ringo watching Dallas walk down a darkened corridor and through a lighted doorway to get some fresh air. It becomes obvious that Ringo and Dallas are falling in love with one another. The problem is, he doesn’t know about her past and he has that pesky business of having to handle his business in Lordsburg, i.e. killing the Plummers. When she tries to explain about her past, he tells her he knows all he needs to know to marry her—that is, if he lives.

The next morning, is both literally and figuratively the dawning of a new day. For example, when offered a drink a redemptive Doc refuses, seemingly rededicated to his profession since delivering Lucy’s baby. In addition, Lucy has a newfound admiration for Dallas, who sat up all night with the baby while she recovered her strength. Evidently while she was watching the baby, 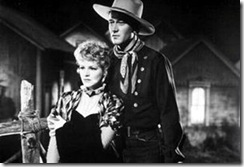 Dallas hatched an escape plan for Ringo so he wouldn’t go to Lordsburg and a) learn about her past, and b) get shot to death by the Plummers—not certain which one she thought worse. When alone, she gives him a rifle and a horse and sends him on his way. He goes a few yards and then turns back—he sees Apache war smoke in the distance.

The stage hurriedly sets off for the ferry. When they arrive they find the ferry destroyed and all of the residents killed by the Apaches. The men rig the stage with hollowed-out logs to float it across the river. Once they make it across, they find themselves in wide-open country. In true John Ford fashion, the scene is shot from a high ridge that reveals Indians positioned to attack the isolated stage. Thinking that they have averted danger, the passengers are preparing to toast one another when an arrow whizzes by and hits Mr. Peacock in the chest. What ensues is 8 minutes of heart-pounding action, as everyone on the stage bands together to fight off the Indian attack. It is during this 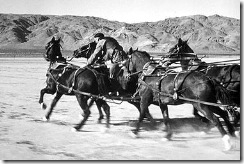 sequence that legendary stuntman Enos Yakima Canutt pulls off one of the most spectacular stunts ever: leaping from his horse onto the moving stage, then attempting to grab the reins he is shot by Ringo and falls down between the horses, grabs onto the thing that connects the horses to the stage and is dragged along the ground, only to be shot again which causes him to fall and have six horses and the stage run/roll right over top him—he lives. In the end, just as everyone is about to run out of ammunition the cavalry arrives to save the day. The only fatality is Hatfield, who was shot just before he was about to kill Lucy to save her from being captured and raped by the Indians.

Saved, the stage, escorted by the cavalry, arrives in Lordsburg. When friends of one of the Plummers sees Ringo on the stage they go to alert them of his arrival. Ringo then asks Marshall Curley to escort Dallas to his ranch across the border. The Marshall agrees and 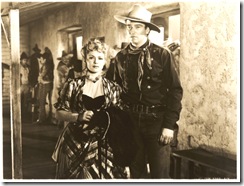 gives Ringo ten minutes to say goodbye to Dallas and to take care of his business with the Plummers. When Ringo tries to escort Dallas home, she refuses to tell him where she lives. In the end, he escorts her to a brothel and tells her he knows about her past and still wants to marry her. With this cleared up, Ringo sets off for the deserted street that will be the scene of his final stand against the three Plummers. Shot mostly in silhouette, Ford uses a long-shot to capture the adversaries as they advance closer to each other. At the last moment Ringo throws himself to the ground and fires three shots. When Dallas hears the shots she believes Ringo is dead. Amidst her grief, Dallas hears the sound of boots walking up behind her and turns to find Ringo emerging from the shadows. When Curly and Doc come to collect Ringo they allow the young couple to escape to Mexico and the freedom of a new beginning.

Truly a stellar film on every level. Bert Glennon’s cinematography is spectacular and sets the standard for all westerns to follow. The plot, nothing short of a morality tale about the power of redemption, is engaging and at times gripping. The action sequences, both the Apache attack and the final shootout sequence sets the bar very high for the rest of the genre. And, finally, the cast is superb. Everyone does a wonderful job playing their particular part in this morality tale. Thomas Mitchell’s Doc and John Carradine’s Hatfield are truly memorable characters. In addition, Claire Trevor pulls off a superb performance as a woman of the world who just wants to be loved and respected. Her performance is multi-faceted. And, finally, John Wayne is excellent as the vengeance seeking Ringo. By far not one of my favorite actors, Wayne gives perhaps his second-best performance (The Quiet Man being his best) here. What he accomplished in this role launched him into a new phase of his career and created the quintessential image of the rugged cowboy in Hollywood’s classic film age. In addition, this film laid the cornerstones for what John Ford would later accomplish in the western genre.