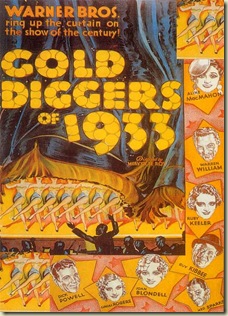 (In honor of the great Broadway producer Florenz Ziegfeld’s 145th birthday I have reissued this post about the classic Warner Bros. musical.)

In 1933 Warner Bros. made three very successful musicals; all of which were choreographed by Busby Berkeley. I have already reviewed the two bookends, 42nd Street and Footlight Parade, so it only makes sense that I give the third (and middle one) its due: Gold Diggers of 1933. While the other two big Warner Bros. musicals of 1933 were directed by Lloyd Bacon, this one was headed by Mervyn LeRoy.

The film is based on the Avery Hopwood play, The Gold Diggers, which first appeared on Broadway in 1919. Screenwriters David Boehm and Erwin S. Gelsey adapted the story to fit the times, namely the Great Depression. If there ever was a musical about the Depression, this is it. As a matter of fact, if someone asked me who the protagonist of the film was I’d say the Depression. 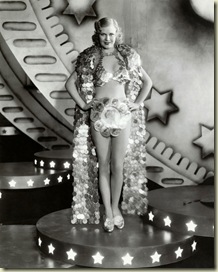 It’s 1933 and times are tough everywhere, especially on Broadway. This is evidenced in the beginning of the film with the “We’re in the Money” number. Here we find Ginger Rogers in one of the tackiest costumes ever, but also very apt for the rest of the film: the idea that chorus girls are synonymous with gold diggers.

Things were great before the Depression in America and on Broadway—they were in the money! But now the Depression has set in and when you can’t pay your bills the creditors shut you down. And that’s exactly what happens to Ginger’s would-be Broadway hit. She and her four roommates are out of a job and wondering how they are going to pay the rent. Fortunately for them and their cash-starved producer (Ned Sparks) they live next door to a gifted singer and songwriter, Brad (Dick Powell), who just happens to be a millionaire. The problem is Brad can’t be “visibly” involved with the show or his family will cut him off. When the male lead goes down with a bout of lumbago, Brad has to step in which brings publicity and the wrath of his family, who believe he is being fleeced by a gold-digging woman: namely his girlfriend Polly (Ruby Keeler). Yes, Powell and Keeler are once again romantically paired in a Warner Bros. film!!! The family sends Brad’s older brother Lawrence (Warren William) and their lawyer Fanny (Guy Kibee) to investigate and buy-off Polly. This move eventually leads to the two “rescuers” finding themselves enamored with Polly’s two other gold digging roommates, Carol (Joan Blondell) and Trixie (Aline MacMahon). In the end, the only “gold digger” who doesn’t find a rich man is Fay (Rogers).

While the story is cute, it is the musical numbers that make this a highly enjoyable film. Berkeley put together four stellar numbers: the opening “We’re in the Money,” the very racy “Pettin in the Park,” the sophisticated “Shadow Waltz,” and the topical “Remember My Forgotten Man.”

Adorned in next to nothing but a few gold coins, 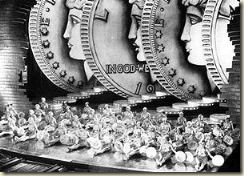 Ginger Rogers sings “We’re in the Money” while other chorus girls dance with giant coins. This was a memorable way to begin a film and it sets up the rest of the film well. I suppose you could say Berkley launched Rogers’ musical career with this number. Yes, she was in 42nd Street, but she wasn’t the focus of any musical numbers.

“Pettin in the Park” is one of the raciest numbers I can think of from this era. Dick Powell and Ruby Keeler sing the number—Keeler also performs a stellar tap dance—while a creepy baby played by Billy Barty escapes from his stroller and harasses chorus girls. In the number a rainstorm happens, and the women go behind a screen and remove their clothes in silhouette. When they emerge they are wearing metal garments, which make it difficult for the men who want to “pet.” Thus, creepy baby finds a can opener. The number is overtly sexual and would have never been allowed only a year later when the Hays Code was put into full effect. 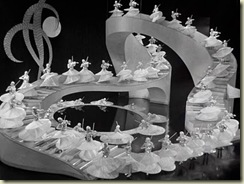 Powell and Keeler also sing “The Shadow Waltz.” In this number Keeler and Rogers (with a whole bevy of girls) dance around with glow-in-the-dark violins. It is visually stunning to watch, but it is not one of my favorite Berkeley numbers. Which is kind of ironic since he (and a number of the girls) almost died while making it when an earthquake hit the studio. Still, the precision in which Berkeley timed these waltzing ladies is a sight to behold. 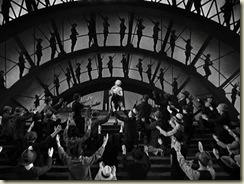 The final number of the film is the most memorable: “Remember My Forgotten Man.” Joan Blondell sings her little heart out in this number which criticizes America for forgetting the heroes of WWI during the economic turmoil of the Depression. The number opens by parading hundreds of forgotten men across the stage as Blondell, playing a hooker, sings about the dire circumstances facing the common man. The song talks about the emasculation of men and what it not only does to them but their women as well. In my opinion, this is THE musical number of the Great Depression. The lyrics say it all:

Remember my forgotten man,
You had him cultivate the land;
He walked behind the plow,
The sweat fell from his brow,
But look at him right now!

And once, he used to love me,
I was happy then;
He used to take care of me,
Won't you bring him back again?
'Cause ever since the world began,
A woman's got to have a man;
Forgetting him, you see,
Means you're forgetting me
Like my forgotten man.

The number was inspired by the Bonus Army’s disastrous march on Washington D.C. in 1932. Over 43,000 people marched to the capitol demanding payment for WWI benefits that were promised to them in 1924. Hoover ordered the army to forcefully remove the marchers and at least two people were killed. The song is awe-inspiring and Blondell’s performance is spectacularly raw and evokes strong emotions in me every time I watch it. This number is the main reason that I watch this film every time it is shown.