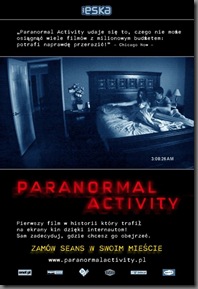 Two words describe this 2007 film from writer/director Oren Peli: absolutely horrible.  I don’t care who gave it 3.5 stars out of a possible 4, I found the whole 90 minutes to be a complete waste of time.  Someone had the audacity to tell me I would be terrified because of how scary this was supposed to be—the only thing that frightened me about it is that there are actual people who think this is a horror movie.

The story is about a twenty-something San Diego couple who start videotaping (handheld and on a tripod) their every waking moment and every sleeping moment to capture whatever paranormal activity is happening in their home.  The couple is annoying and by

the end of the film you hope whatever is haunting their home kills them both. The handheld camera work makes you nauseous and you pray the camera will be dropped and broken—thus ending your headache and queasy stomach.

Paranormal Activity is the most profitable movie ever made. First made as an independent film on a shoestring budget, its film rights were bought by Paramount Pictures for $350,000 and it made over $190 million.  As if this isn’t startling enough, it has also launched a franchise and as I write this they are making the fourth installment.  Why anyone would want to watch any movie that aims to replicate this one is beyond me.