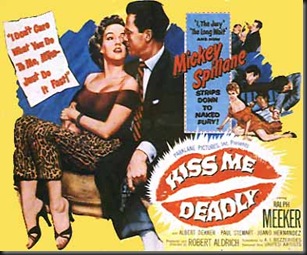 Robert Aldrich's Kiss Me Deadly (1955) opens with a woman's bare feet sprinting on an apparently deserted road. The woman, Christina (Cloris Leachman, in her film debut), stands in front of an approaching vehicle. Gumshoe Mike Hammer (Ralph Meeker) swerves his car to avoid hitting her, and he reluctantly agrees to take her to the bus station. On the way, Christina tells Mike that, should they not make their destination, he needs to do one thing for her: "Remember me," she ominously states. Suddenly, they are forced off the road, and a semi-conscious Mike later sees a congregation of feet, while hearing Christina being tortured and killed. The dazed P.I. and the woman's body are put into Mike's car and pushed down a cliff. 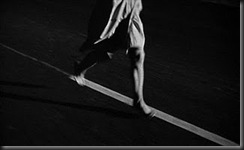 Mike Hammer awakens in the hospital and is subsequently questioned by the police. The private eye, who specializes in divorce cases, soon has people asking about him, following him, and idly threatening him. Cops and criminals alike think that Mike is withholding pertinent information, and after having his private investigator's license and gun permit revoked, he tells his secretary and lover, Velda (Maxine Cooper), to forget the cheating spouses so that they can focus solely on "something big." And what everyone seems to be after is indeed big, bigger than Mike could ever anticipate. 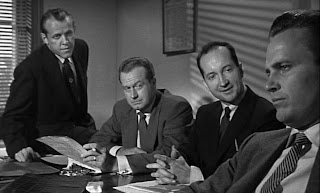 Kiss Me Deadly was based on a novel of the same name by Mikey Spillane, featuring his immensely popular character. Reportedly, screenwriter A.I. Bezzerides, who adapted the book, had such aversion for the source text that the film ultimately took a dim view to Mike Hammer, turning him into a rather vile and despicable character. When initially interrogated, Mike refuses to talk, and the cops seem disgusted by him, asking him questions and patronizing him by "answering" on his behalf. When the gumshoe leaves, one of the men vindictively states, "Open a window." This is a man who knocks someone down a long flight of steps and smirks as he watches him roll down, a vicious person who clearly takes pleasure in slamming an uncooperative man's fingers in a desk drawer. He's the definitive antihero. He drowns the world out with loud classical music and screens his phone calls.

There are so many twists and turns in this film that it feels like constant movement. The first shot of Kiss Me Deadly is, appropriately, running feet. There's a distinct impression that Mike is running from place to place, hoping to be two steps ahead of everyone but more accurately having trouble keeping up. The concept of momentum is a significant component of the movie. Mike tries to identify Christina's killers by shoes, the deceased woman is equated with her roommate, Lilly (Gaby Rodgers), as she is likewise introduced with bare feet, and when Mike is taken captive, he is knocked unconscious and dragged (on a beach, as his feet leave a trail), and he is bound by feet and hands. 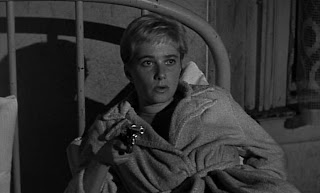 Mike moves forward with the investigation, and the villains want to stop him. His first car is wrecked, and he is "given" a second car with an explosive surprise. Other people have been killed in "accidents" involving vehicles. It's fitting that one of Mike's only friends is Nick (Nick Dennis), an auto mechanic whose catchphrase is, "Va-va-voom!" He's essentially an antithesis to the villains, wanting to fix what they wish to destroy.

With this in mind, the film's title can take on multiple connotations. A superficial view would associate the "kiss" with succumbing to the affection of the opposite sex, letting down your guard and opening yourself to a lethal reciprocation. But it can also refer to what Mike himself calls "the sweet little kiss off," an acknowledgment of death or, more specifically, the very thing which kills you. This gives deeper meaning to a warning provided by Velda: "Keep away from the windows. Somebody might blow you a kiss." Most notably, however, Kiss Me Deadly is a recognition of both good and bad, that sex ultimately leads to violence, as the two go hand in hand. Perhaps the film's quintessential shot is Lilly lying in bed, adorned in a robe and pointing a gun at the door. 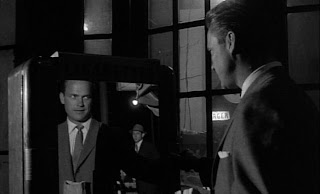 Aldrich's film is abundant in atmosphere and style. Furthermore it's surprisingly violent, some of it even by today's standards. The majority of the violence's impact is not from the presentation itself but rather the callous way in which Mike dishes it out. Ralph Meeker has incredible presence, making Mike Hammer the type of character who makes a viewer feel both unassailable and anxious. At one point, Mike is shadowed by a stranger. The P.I. spots him almost immediately and seems to enjoy the moments preceding the inevitable attack. When the stranger pulls a switchblade, Mike forces him to drop the knife with the greatest of ease, before knocking him around and slamming his head against a building several times. It takes an extraordinarily cruel protagonist to make an audience sympathize with a man whose intent was to literally stab someone in the back.

The thing that everyone wants -- what Velda calls "the great whatsit" -- will likely be a surprise for anyone who hasn't seen the film (and hopefully hasn't been told how the film ends). Kiss Me Deadly continues its winding plot all the way to the closing credits, creating one of the grandest and most gleefully erratic cinematic endings of all time. Interestingly, for years the film's conclusion was truncated and left a couple of characters' fates in question. More recent copies of the film (the DVD, for instance) have the original ending intact. 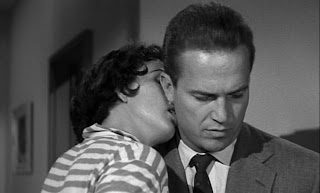 Kiss Me Deadly is a solid entry in the film noir genre. Mike Hammer in Mikey Spillane's novels was a driven man, taken to seeking his own brand of justice; just look at some of the titles -- I, the Jury, Vengeance is Mine, etc. But Aldrich's cinematic Hammer is much more brutally simplistic. He just wants the payoff, indifferent to the people he hurts or kills, ignoring the police's requests for information, etc. In the end, it's impossible to tell if Mike wants to solve the mystery, if he's still hoping for monetary compensation, or if he's merely going through the motions. Such an enigmatic and unlikeable character within a baffling plot makes Kiss Me Deadly a beautifully complex and highly recommended feature.
Posted by Kimberly J.M. Wilson at 12:15 AM