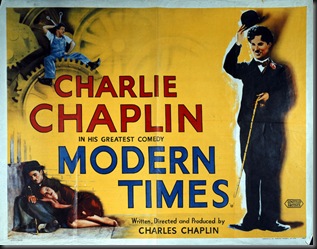 Talking pictures had been around for about a decade when Charlie Chaplin released Modern Times (1936).  A silent film star with a instantly recognizable screen alter ego—the Little Tramp—Chaplin debated whether he should let the Little Tramp speak in this film.  In the end, he chose to make Modern Times his last silent feature film—and the last appearance of the Tramp as well.  However, it should be noted that the there is sound in this film, with machine sounds and voices out of televisions. We also hear the Tramp’s voice when he sings a song in Italian gibberish—perhaps a tongue-in-cheek slap in the face of talking pictures by Chaplin? In the end, the film that took Chaplin four years to make—I suppose when you write, star, direct, score, and produce it takes some time—turned out to be one of his best.

This is a protest film against the effects 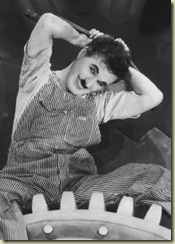 of automation on mankind. The Tramp represents the millions of people who were unemployed during the Great Depression, who saw machines doing jobs that would have put food in their bellies and roofs over their heads. He was quoted in  a newspaper article as saying that “unemployment is the vital question… Machinery should benefit mankind. It should not spell tragedy and throw it out of work.” The dehumanizing effects of industrialization and unemployment are at the forefront of this film. It is up to the Tramp to struggle against these unruly behemoths, while not so carefully waddling through the institutions that support them. 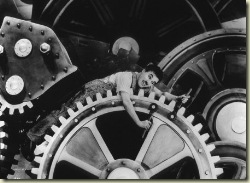 Now, when you start a film by showing a flock of sheep dissolving into workers you begin it with a statement. We first view the Tramp working on a factory assembly line where he has to tighten nuts/bolts with both hands while his boss watches from the comfort of his office via a video camera. Since everything is based on precise timing, the worker doesn’t have a second to itch--and when the Tramp does this he creates hilarious chaos on the production line, trying to catch up to the bolts he missed. One of Chaplin’s more memorable sequences, this was parodied on I Love Lucy when Lucy works in the candy factory. At lunch time the Tramp is chosen as the guinea pig for the company’s new feeding device, which is designed to cut lunch periods. 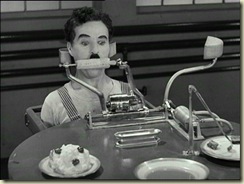 The machine malfunctions and the Tramp is treated to bolts instead of food, shortcake in the face, and soup everywhere but in his mouth. After lunch the boss speeds up production and the Tramp can’t keep up, so he lies down on the machine and is literally fed through the gears of the machine. This is a visual image worth watching. In the end, it is deemed he has had a mental breakdown and he’s whisked off to the funny farm.

After being released from the psychiatric ward the Tramp makes the mistake of picking up a red flag on the street and waving it.  Unfortunately for him there is a communist rally happening at the 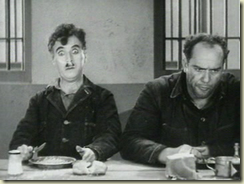 same time and he is mistaken as one and hauled off to jail. While in jail he makes yet another mistake when he unknowingly uses a salt shaker filled with cocaine to salt his food. Fortunately for him the cocaine gives him such an adrenaline rush that he helps thwart a prison escape by knocking out his fellow convicts. This eventually leads to his release from jail.

The Tramp’s next job is in a shipyard. It’s a short-lived one after he accidentally sinks a ship. Faced with starvation the Tramp remembers that prison wasn’t so bad, with a warm bed and food to eat, so he tries to get arrested again. This is where he meets Paulette Goddard’s (Chaplin’s then wife) orphan character, whom he runs into as she’s fleeing from a bakery heist—she was hungry. She’s arrested and so is he after he knowingly steals some cigars. On their way to jail their paddy wagon swerves and both captives are thrown out.  And, so the Tramp and the 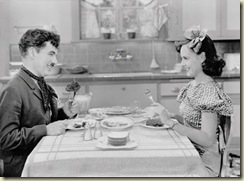 orphan go on the lam together. Inspired by a dream sequence where he and the orphan can live together in suburban bliss with enough food to eat, the Tramp sets out to make this happen.

He takes a job as night watchman at a department store. Here the Tramp and the orphan eat to their hearts content.  Wearing roller skates the Tramp happens upon burglars who just want to eat.  The next morning the Tramp is found asleep and is taken to jail for all the “missing” items. When he gets out of jail he finds the orphan waiting for him. They move into a shack by the lake.  When his old steel mill reopens the Tramp gets a job as a mechanic’s assistant. 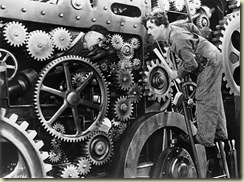 One of the best sequences in the film happens here. While helping the mechanic (Chester Conklin) get the machines moving again, the Tramp sees his boss get caught in the machine and he has to help free his boss from the moving gears and wheels of the machine. At one point the only thing you can see of the mechanic is his head—he has literally been swallowed by the machine.

When the workers go on strike, the Tramp is out of a job yet again. When he accidentally hits a policeman in the head with a brick he’s taken back to jail. While he’s in jail 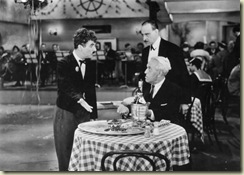 the orphan gets a job as a dancer in a cabaret. She gets him a job as a waiter. Falling dishes, roast duck footballs, and forgotten song lyrics somehow aren’t enough to get him fired—and so he seems to have made it as a singing waiter. Too bad the juvenile authorities come to pick up the orphan and they have to flee secure jobs.

The final sequence finds the orphan girl downtrodden about their circumstances.  She wants to know what the point is in even trying.  It is up to the Tramp to keep her going—and that’s what he does. 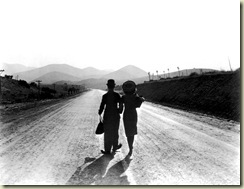 Unlike other films where the Tramp is seen waddling out into the cold world alone, this one finds him waddling side-by-side with the girl he loves looking for the idealized American dream of prosperity.  It is a fitting end to the Little Tramp’s appearance on the Silver Screen.

This is most probably my favorite Little Tramp movie. All of the choreographed sequences are a treat to watch, especially the machine scenes.  I also enjoyed the message that Chaplin was trying to send with this film.  There is something overtly dehumanizing about the factory system. In addition, he does a good job of expressing what people really went through during the Depression.  People really did commit petty crimes just to stave off starvation or to end up in jail where they knew they would be given something to eat and a warm place to sleep. While he made only two appearances during the Great Depression (this and City Lights), I often think of the Little Tramp as its mascot.  As I said earlier, I think this was a fitting end for the Tramp.  Beaten down and dehumanized by industrialization, the Tramp looks to the future with hope, as no doubt millions of others did during this same time period. Truly a film of its time.
Posted by Kimberly J.M. Wilson at 1:54 PM