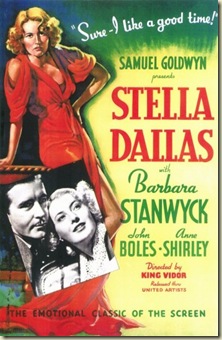 Throughout her storied career Barbara Stanwyck played every female character produced by Hollywood: ingénue, seductress, bad girl, gangster moll, heroine, entertainer, con woman, socialite, etc. While she carried every role off like a true professional, it was the working class girl who wanted to make good role that she most excelled at.  This most probably had to do with her meager, but colorful, upbringing. Orphaned at the age of four, she spent time in foster homes, but was primarily raised by her showgirl sister, Mildred. It was on the vaudeville circuit with Mildred that Stanwyck learned what it took to get ahead in life: strength, determination, and ambition. These, of course, are the same characteristics that many of Stanwyck’s working class roles required—especially Stella Dallas. 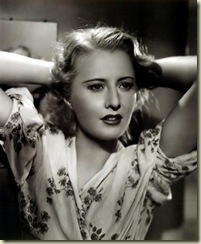 Considered one of the best female character roles of all time, Stella Dallas earned Stanwyck the first of her four Academy Award nominations for Best Actress. The daughter of a mill worker, Stella schemes to marry her father’s boss, Stephen (John Boles).  Although they are from two very different backgrounds—he is reserved and refined, while she is loud and crass—they find themselves married and raising a daughter. As Stella finds herself bored with Stephen’s ways, she begins to revert to her tacky ways.  Eventually Stephen leaves her, but leaves their daughter Lollie (Anne Shirley) with Stella because he knows that she is a good mother. As time passes, Stephen finds a much more suitable (and wealthy) woman (Barbara O’Neil) to marry, but Stella doesn’t want to give him a divorce because she’s afraid she’ll lose Lollie. In the end, when she realizes that she cannot give Lollie the life she wants her to have, she makes the ultimate sacrifice.
Of all her roles, and there were many to choose from, this was Stanwyck’s favorite. What’s interesting about this is that Samuel Goldwyn didn’t want to give her the part. He thought she lacked the necessary sex appeal for Stella and wanted Ruth Chatterton for the role. All I can say is: Really? Thankfully director King Vidor and hunky Zeppo Marx (her agent—yes, really) finally convinced Goldwyn that Stanwyck was the right woman for the role.

Based on the Olive Higgins Prouty’s 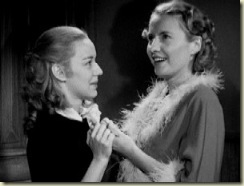 popular novel of the same name, Stella Dallas is considered one of the greatest tearjerkers ever produced. It is a melodramatic film, but it isn’t schmaltzy. This, of course, has to do with Stanwyck’s multifaceted performance. At times, she plays her character as a conniving shrew and you just want to slap some sense of decency into her. Then, she plays Stella as a loving and devoted mother and you just want to wrap your arms around her and give her a hug.  I suppose the scene where she convinces Lollie that she wants to get rid of her so she can run off to South America with her salesman boyfriend is my favorite because Stanwyck plays it with such raw emotion.  Knowing that the only way she can get Lollie to leave her is to convince her that she doesn’t want or need her, Stella is almost ruthless in the act she puts on for Lollie. Not every actress could pull this off, but Stanwyck does a wonderful job of having the audience both hate and admire her at the same time in this scene. It is difficult to watch this, but at least the final scene in the film heals some of the hurt that the audience has endured by Stella’s sacrifice.

This is a film ruled by women---the men are totally forgettable.  Besides Stanwyck’s great performance, the audience is treated to two standout offerings by Shirley and O’Neil. Nominated for Best Supporting Actress, Shirley does a nice job of playing a young woman who loves her mother but is conflicted by her desire to live a more respectable life.  This may have been 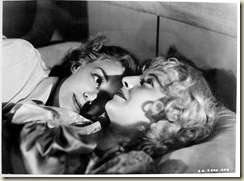 the finest performance of her career (I do like her in Murder, My Sweet though), but sometimes it is difficult for me to suspend my belief that Stanwyck was old enough to play her mother (they were only eleven years apart in age). That said, she does give a touching performance. An interesting aside about the Stanwyck/Shirley connection is that Shirley played Stanwyck’s younger self in So Big (1932). In addition to Stanwyck and Shirley, O’Neil also does a fine turn as Stella’s polar opposite. I enjoyed watching her scene with Stanwyck.  It was one of those only another mother could understand moments that pull at your heartstrings.

In the end, Stella Dallas is a film you don’t want to watch without a box of tissues.  It is a prime piece of evidence that Stanwyck was one of the greatest actresses to grace the silver screen.
Posted by Kimberly J.M. Wilson at 12:50 AM