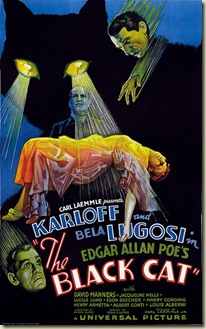 Without a doubt the most unusual horror film to come out of Hollywood in the 1930s was Universal Studio's’ The Black Cat (1934). How does one go about creating such a unique film? You take two renowned horror stars (Dracula himself, Bela Lugosi, and Frankenstein’s monster, Boris Karloff—in the first of seven films they would appear in together), add a dash of a director (Edgar G. Ulmer) heavily influenced by German expressionism, and then you mix in some strange amalgamation of Edgar Allan Poe’s “The Black Cat” and “The Fall of the House of Usher” with necrophilia and satanism, and , finally, you top it off with an an eye-catching art deco set design by Charles D. Hall. Never mind that the story is difficult to understand (Universal ordered massive changes to the original cut due to its risqué plot),this is just too bizarre a film to miss.

Predating The Rocky Horror Picture Show (1975) by more than 40-years, The Black Cat finds two young lovers caught in the middle of a sadistic chess match between a mad 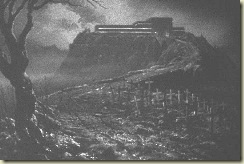 architect/scientist and a depressed doctor. Dr. Vitus Werdegast (Lugosi) is returning home to Vizhegrad (Hungary) after spending the last 15 years in a Russian prison camp (Kurgaal). On the Orient Express (no Poirot doesn’t show up), Dr. Werdegast meets Joan (Jacqueline Wells) and Peter (David Manners) and immediately notices that Joan looks a lot like his lost wife. He tells them that he is on his way to visit an old friend, famed architect Hjalmar Poelzig (Karloff), at his mansion, which just happens to be built on a cliff overlooking the “greatest graveyard in the world” at Fort Marmorus. Really? Could there be a more ominous setting? 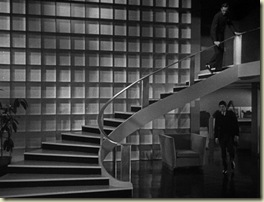 Later, when the bus they are travelling on crashes into a ravine, Joan is injured and it is determined that the couple should accompany Dr. Werdegast and his servant Thamal (Harry Cording) to the mansion. And this brings us to the best part of the film—the set design of Poelzig’s digs. Everything is ultra-modern, from the lighting (entire walls light up) to the super-sleek curved staircase.  Photographer John J. Mescall uses every inch of the set design and beyond-clever lighting to create some outstanding visual elements—you have to see it to truly appreciate it.

In a rather strange poke at Dracula (and Lugosi?), Poelzig is first introduced to the audience rising rigidly from his bed.  With a widow’s peak and dramatic sense of style (he wears a priest’s robe), Poelzig looks like the kind of man who would commune with the devil. It soon becomes apparent that Werdegast and Poelzig aren’t really BFF’s. Evidently Poelzig betrayed his countrymen in WWI and ran off when the Russians came. What Werdegast really wants is to find his wife (Karen) and daughter, and he thinks Poelzig might know where they are. Well, yeah, he does—he married Karen after telling her Werdegast was dead. Ah, the plot thickens…

As if this news wasn’t enough, Werdegast must deal with a reappearing black cat. For a normal person this wouldn’t be a big deal, but Werdegast is deathly afraid of 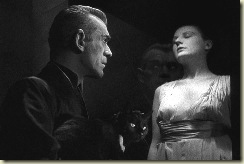 them—did I mention he’s a psychiatrist…yeah, you’d think he could engage in some self-analysis to overcome this fear. Nope…instead he chooses to regard them as, and I quote, “the living embodiment of evil.” Ah, Werdegast, there are eviler things in the world—just ask Poelzig, who has a cellar full of dead women encased in glass. One of these women happens to be Karen (Lucille Lund) and when Poelzig reintroduces the “couple” it is not a happy time. Werdegast attempts to shoot Poelzig, but before he can pull the trigger another black cat saunters in and immobilizes the doctor. 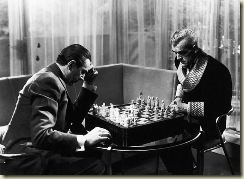 Later, we learn that the doctor’s daughter, Karen (Lucille Lund…yeah, just go with it) is now Poelzig’s wife…a secret he chooses to keep from the doctor. One secret he doesn’t have a problem sharing, though, is that he plans to use Joan in a satanic black mass ritual. Of course, he is willing to challenge the doctor to a game of chess for Joan’s soul. Too bad for Joan that the doctor isn’t Bobby Fisher… Ah, and so let the Bach toccatas begin—really, Poelzig plays them on his creepy organ right before he kills Karen for sassing him. And, then the fun really begins!

Although it isn’t Halloween, Poelzig decides to host a satanic cult party at the fortress and Joan is the guest of honor. Organ music, broken Latin, black-tie attire, and a 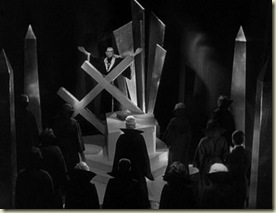 human sacrifice as the ultimate party game—who’d want to miss out on that! Well, Joan for one…I won’t spoil the ending for you, but lets just say it is a blast.

Unique in every sense, The Black Cat is high camp without being a camp film (is that possible?). Lugosi and Karloff play well off one another, but I wasn’t shocked to learn that neither received an Academy Award nomination for their performances in this film.  Still, I was a bit miffed that neither Charles D. Hall or John J. Mescall were recognized for their outstanding set design and photography.