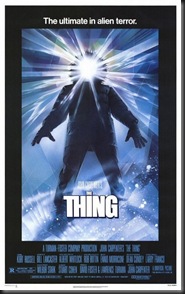 When I first saw this movie in 1982, I left convinced that John Carpenter had produced a complete misfire (especially in comparison to the classic 1951 version). But I’ve come to learn over the years that some movies age well, or perhaps they grow better because we’ve aged and our tastes have changed. John Carpenter’s The Thing is definitely one of those films for me. It's now required viewing on the first snowy day of winter and has become my favorite among the director’s work.

The Thing opens in intriguing fashion with a helicopter chasing—and trying to kill—a lone Husky in the desolate Antarctica snow. The dog runs to the U.S. National Science Institute No. 4, a remote research station. In a bizarre series of events, the helicopter crew is killed and the dog is taken in by the research station’s residents. But this is no ordinary dog. It prowls the station’s corridors stealthily as if stalking its prey. It spies silently on the residents. It’s afraid to join the other dogs, which snarl at the newcomer viciously. 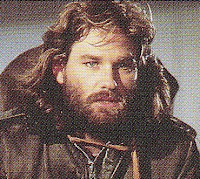 Seeking an explanation for the helicopter crew’s unusual behavior, McCready (Kurt Russell) and Doc (Richard Dysart) trace its origin to a Norwegian research facility. They discover frozen corpses and a strange, partially buried “thing” that could be human. Back at the U.S. station, an alien creature reveals itself for the first time by mutating out from inside the Husky (a fairly gory scene). With the creature’s ability to imitate other life forms established, the film’s premise is finally set into motion.

If the alien can be anyone of the research station’s crew, how can it be stopped? The seriousness of the situation worsens when one of the scientists models the alien’s ability to infect humans. He determines that if the “intruder organism” reaches the general population, it could take over the planet in 27,000 hours from first contact.

The plot is supposed to be closer to John Campbell’s short story "Who Goes There?" than 1951’s The Thing (see Aki's nifty review from earlier this month). But, truth to be told, this is a mystery masquerading as science fiction. A murderer is among a group of people at a remote location—isn’t that the plot of Agatha Christie’s Ten Little Indians? The twist here is that the killer can reveal itself and then hide again by assuming another identity. The film’s best scene is when McCready devises a test for revealing the alien’s identity. This tense setup also recalls the classic mystery climax where the detective calls together all the suspects and unveils the murderer.

Subsequent viewings of The Thing allow one to appreciate its smaller pleasures: Ennio Morricone’s suspenseful electronic score (which has a definite Carpenter sound to it); an open ending that actually works (usually I loathe them); and Kurt Russell’s solid performance (less cartoonish than in Carpenter’s Escape from New York and Big Trouble in Little China).

Still, it’s the remote locale and the “who is it” premise that makes The Thing so entertaining for me. Other films have featured aliens who could take human form (most notably, the original Invasion of the Body Snatchers and cult classic The Hidden)—but this one remains my favorite.