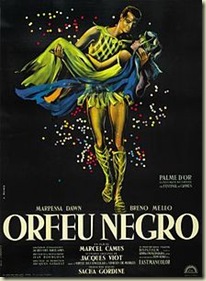 French director Marcel Camus had a novel idea about a retelling of the Greek myth of Orpheus and Eurydice: stage it in Rio de Janeiro during Carnival and use an all-black cast.  It was a risky proposition, especially when you consider that it was filmed primarily on location with streets full of people, but it worked out spectacularly. Black Orpheus (Orfeu Negro, 1959) went on to win the Palme d’Or at the 1959 Cannes Film Festival and the 1960 Oscar for Best Foreign Language Film. 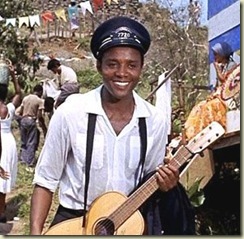 Our hero, Orfeu (Breno Mello), is an engaged and handsome Rio trolley driver. His fiancee, Mira (Lourdes de Oliveira), is a beautiful but jealous woman with anger issues. When an innocent, country girl, Eurydice (Marpessa Dawn), comes to the city to escape from a man who is trying to kill her, she catches Orfeu’s eye and Mira’s ire. It is a tragic love story shot in a beautiful, vibrant location, with an  outstanding soundtrack full of samba music.

From the opening scene of the film, where white Greek statues transform into rhythmically inclined black men, Camus shatters any preconceived notions the viewer might have about this being another traditional film about the Greek legend. That’s not to say that the story is totally stripped of its tradition, as many of the characters are named after those in the original story. 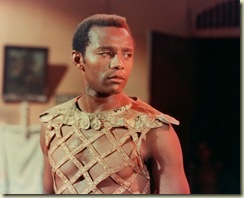 Of course, there is Orfeu (Orpheus) and Eurydice, but there are other Greek references, such as Hermes (Alexandro Constantino), who is always ready with directions, and a janitor who serves as Charon, ferryman of Hades. In addition, there is a dog that represents the three-headed dog of Hades, Cerberus, who guards the dead at the morgue (Hades).

Though told in a modern way, with more colorful characters and music, the story is the same. Eurydice is a woman running away from death, and when it comes, the man who loves her wants to bring her 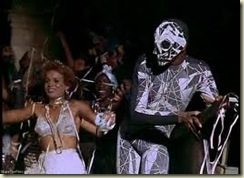 back at any cost. Camus and his costume department benefit greatly from the Carnival setting, as clothes can be used both symbolically and stylistically. For example, the man who has come to kill Eurydice is dressed in a creepy skeleton costume. This works, of course, because costumes are a part of Carnival. And the theme of life and death that goes along with Carnival is stressed in a convincing way.  No one would find it strange that Death (dressed in a skeleton costume) would wield a knife at a Carnival celebration.

In addition, the theme of Fate is paramount in this film. As most know, the Fates (according to Greek mythology) decide how long one lives—when it is time to die, no one can outrun their destiny.  It was fated that Orfeu would meet Eurydice and 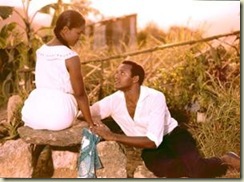 fall in love. It was also fate that no matter how fast Eurydice ran from death, either from the creepy skeleton or the jealous Mira, eventually the time would come for her to die—even at the accidental hands of the man who loved her.

I suppose a lot of people prefer the happier elements of the film, when the young couple fall in love and there is a lot of dancing and singing. I , myself, enjoy Orfeu’s descent into the underworld. When he calls to Eurydice through song and a voodoo ritual, and she appears in the form of an old woman and begs him not to look at her before they reach  the

upper world, it is heartbreaking—especially when he looks at her and her spirit disappears forever. Watching Orfeu carry his beloved’s body back to his burning house is an eerie experience as well.

Quite simply, it is a heartbreaking tale of lost love.  There is a smoldering quality to the passionate love affair between Orfeu and Eurydice. And the foreboding nature of the samba drums is at times unbearable. Anyone familiar with the Greek legend knows what the outcome will be, but that doesn’t make it any less brutal when it does come. For a primarily unknown and untrained cast, the acting is rather good, especially Marpessa Dawn as Eurydice. Overall, a visually stunning film and a story that absolutely rips your heart out—and then watches it beat in rhythm to the pulsating drums of its soundtrack.